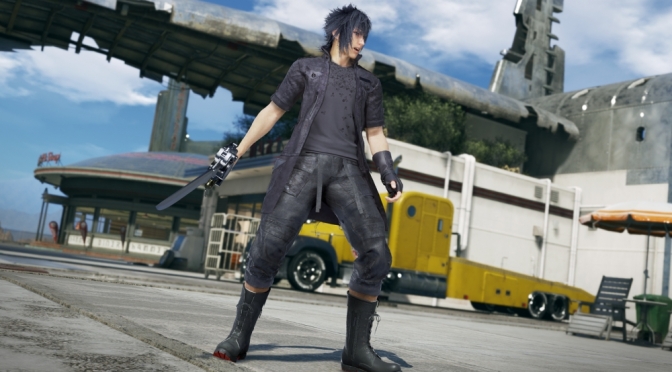 Bandai Namco has announced that Tekken 7 will add Noctis from Final Fantasy XV to the roster as paid DLC on March 20.

If you missed the announcment trailer from last fall, don’t worry, we have you covered.

Tekken 7 is available now for Playstation 4, Xbox One, and PC

Traveling to compete in the Capcom Cup or Evo might not work out for some with work, travel fees, etc.  But Bandai Namco is helping Tekken players out by hosting a World Wide online Tekken tour!  Players can now compete in tournaments from their own couch opening up Tekken to more players.

Here are the nitty gritty details:

Each TEKKEN World Tour region will have multiple tournaments to cover the entire region over the course of the series. Dates and times for each sub-region listed are listed in the schedule. Players can compete in tournaments on all platforms within their region.

All tournaments will be double elimination. All matches will be Best-of-Three, except for Winners Finals, Losers Finals, and Grand Finals which are Best-of-Five.

Each tournament will begin on a Sunday for bracket play. Bracket play is scheduled to begin at 4 PM region-local time.

Top 4 Finals from each tournament will be contested on the following Tuesday or Wednesday night, respectively, depending on region.

Schedule for Top 4 Finals per platform will be;

Finals will be broadcasted on Twitch.tv/TEKKEN.

All TEKKEN World Tour Online Tournaments will award points to players placing in the Top 8 of the bracket. Online points are awarded as follows:

For complete rules please see the Rules on tekkenworldtour.com

In the event of connectivity issues either player should reach out to the Tournament Administrators, Level Up LLC, to review the situation.

If there is a dispute arising during the Online Event, Players must submit a screenshot or share video footage to Level Up LLC, the administrator of the Online tournament, for review. Disputes will be resolved on a case by case basis by Level Up LLC administrators.

No-shows and/or late arrivals will be given a loss if they do not report to their match within 10 minutes of being scheduled. If a player no-shows or is a late arrival to their loser’s bracket match, they will be disqualified.

Any player not adhering to the TEKKEN World Tour rules during the course of of the tournament is subject to disqualification at the discretion of Level Up LLC.

Another character joins the Tekken 7 rosters.  Meet Eliza, who brings her fangs and fighting skill to battle!  She’s certain to give you a “Vampiric fighting experience”.

In addition to this sexy new character, Taiko No Tatsujin themed items from outfits to health gauge skins are now available.

Have you had a chance to play Tekken 7? If so, who is your favorite character to play? Will you be picking up Eliza? Let us know in the comments!

During Evo 2017, Bandia Namco announced Tekken 7 will add Geese Howard from Fatal Fury as a playable character via downloadable content this winter.

Here’s an overview of the character, via Bandai Namco:

Geese Howard from Fatal Fury enters the Tekken 7 ring! Facing off against the likes of Heihachi, Paul, and Akuma, Geese Howard sports his signature red hakama training pants as he vows to destroy the Tekken fighters. Jump into the arena where the Tekken and Fatal Fury universes collide!

Tekken 7 is currently available for PlayStation 4, Xbox One, and PC.

You can check out the trailer below.

Bandai Namco has announced that Tekken 7 will be adding two new exclusive guest characters from other video game licenses as paid downloadable content, as well as a small outline of the additions included in the game’s post-release downloadable content schedule:

Tekken 7 will launch on June 2 for, Playstation 4, Xbox One, and PC.