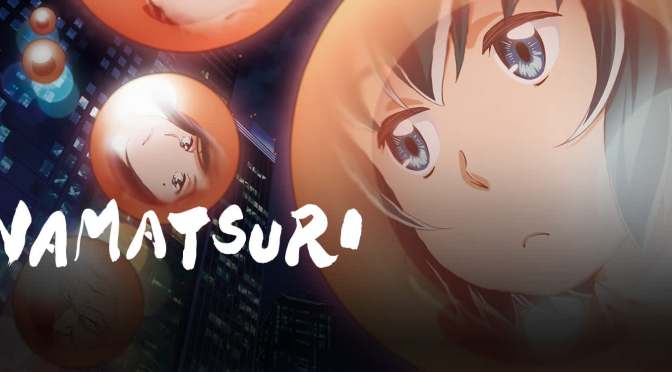 What happens when a Yakuza, who is an avid porcelain collector, encounters a mysterious girl with telekinetic powers? Well, his apartment doesn’t survive, that’s for sure!

Hinamatsuri is a comedic slice of life story with some science-fiction/supernatural aspects.  The main character, Yoshifumi Nitta, is a yakuza member who encounters Hina when her pod randomly lands in his apartment.

What makes this show fun to watch is the cast of unique characters.  Nitta is a yakuza member who honors his gang, but isn’t really that intimidating.  When Hina lands in his apartment, despite wanting to remain a bachelor, he takes care of her which, ultimately, places him in the role of her “father” or “guardian”.

Not much is known about Hina’s past other than she has likely come from another world, she has telekinetic abilities, she is generally pretty lazy, and she loves to eat Salmon Roe. 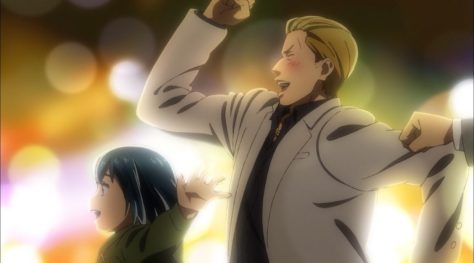 More characters come into the story. Anzu is also superhuman like Hina and after attempting to battle Hina, and loses, she tries to return home. However, the device she used to go back to wherever it was she came from is broken! Unable to return home, she is taken in by a homeless community and learns the meaning of hard work – she becomes the complete opposite of Hina, who is quite spoiled. Anzu is probably the most endearing character since she takes the lessons she’s learned from the homeless community to heart.

Hitomi is Hina’s classmate.  Drawn in by Hina’s nonchalant pace, her skills as a bartender are recognized.  Blackmailed by a Utako Sakura, bartender of Little Song, Hitomi is forced to live a secret life as an 11 years old bartender!

Those are only a couple of characters that make this story so entertaining.  Other characters are introduced, and you’re pulled into a crazy telekinetic, yakuza, school life, bartender story!

The series, for the most part, is pretty episodic.  Everything happens on an individual basis but the stories are still connected.

I found this series to be a lot of fun.  Hina is a pretty terrible character, but this is acknowledged through the entire series.  I always get a little fussy when there is a problem that goes unsolved (i.e. Hina never goes back to where she came from, there’s no real explanation about her past), but the diversity of characters and story shorts overpowers that desire to know.

This is a fun series to check out if you have the chance. Definitely a quirky find.

Have you had a chance to watch this series?  Have you read the manga? Will you be checking it out? Let us know in the comments! 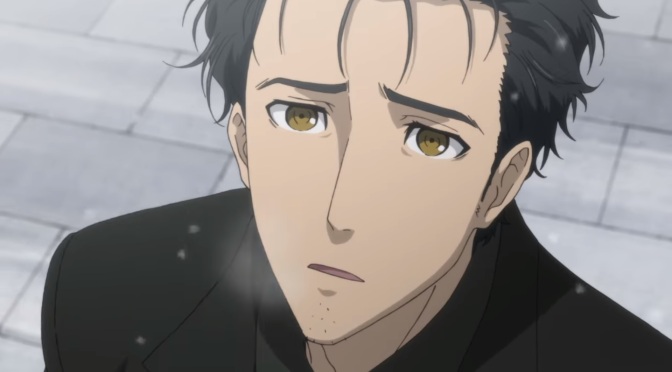 5pb has released the second trailer to the upcoming Steins;Gate 0 anime.  The series is a sequel to the 2011 anime series Steins;Gate, and is planned to premiere on April 11, 2018.

Here is a brief overview of the story, and the trailer.

“This is a story of a ‘future’ I wasn’t able to save.”
A “true sequel” that takes place November 2010, β Timeline — A world line where the protagonist, Okabe Rintarou, at the end of overcoming countless hardships and sorrows, had given up on saving “her.”
Okabe is at the bottom of despair…
His friends worry for him…
And what about the “girl” he wasn’t able to save?
Learn of it through the tale of “zero” where new encounters converge.
“She,” without a shadow of a doubt, continues to exist in there…

After long journeys via world lines, Okabe returned to his daily life, albeit crushed by the regret and misery of not being able to save “her.”
While helping out in a college seminar in order to finish off what “she” had already started, he comes across Professor Alexis Leskinen and assistant Hiyajo Maho, who were both on the same team and school as “her.” There, he discovers “Amadeus,” a system still in the stages of development that can store human memories inside computers.
Okabe was told that the Amadeus had “her” memories stored inside, and was requested by Professor Leskinen to cooperate with him as an Amadeus tester by means of conversing with “her” through a monitor. The system was inputted with “her” memories before “she” had ever met Okabe.
Upon encountering “her” installed within this architecture, Okabe’s life begins to change completely…

Based on a light novel by Nisio Isin and illustrated by Hikaru Nakamura, Juni Taisen takes place in a city where 500,000 citizens have been evacuated so the deadliest killing game can take place. The tournament happens every 12 years and the winner will have a wish granted to them.  Each character is a warrior with a fighting style and name based on the 12 Chinese Zodiac animals.  In order to ensure the battle is quick, each warrior must swallow a black gem that will kill them in 12 hours.  Their goal is to retrieve all other gems before their time runs out.

What I enjoy about the series is how unpredictable it feels.  We start off following the Boar, assuming the story will follow her.  However, the series takes a quick twist when she dies at the end of the first episode.

Not only is the series unpredictable, but there’s a variety of characters.  Each character has a unique, almost inhuman ability that gives them an advantage over their opponent.  It is fun watching the battles play out wondering who the winner will be.

That said, I recommend checking this series out to anyone who doesn’t mind violence and prefers a more mature story line.

I will admit that I do worry about the ending.  I’ve noticed that some series with strong openings tend to fall flat in the end.

Have you had a chance to check out this series? What do you think of it so far? Let us know in the comments!

I am always afraid when I see a maid on the cover of any anime.  The anime “market” has been so saturated with fan service so it’s hard to find a series that isn’t just a slew of pantie shots, nose bleeds, bouncing breasts, and awkward situations.  Not to mention adding food? Food Wars (although an ok series) nearly scared me off from Restaurant to Another World, however, I gave it a shot anyway.

Western Resturant Nekoya specializes in Western and Japanese dishes, but on the 7th day of the week at midnight the doorway to the restaurant appears in another realm.  Creatures from another world are able to dine at Western Restaurant Nekoya and experience a delicacy non-existent in their world.

When food is consumed by the mystical patrons, they have an experience like no other – the food is always so delicious!  It’s an interesting concept introducing foreign food to another world.   But this aspect gets dull pretty fast.  Particularly with the “orgasmic” approach to eating food.  Everything is “exquisite” and fits the diners palette just so darn perfect.

The highlight of the series is learning about food dishes, following the lives of the creatures outside of the restaurant, and seeing how the magical world has influenced and impacted the restaurant.

While the series seems to have very little conflict, it’s a good watch if you’re looking for a mellow and “mature” series.

Have you had a chance to check out this show? Have you tried any of the dishes featured in the show? Which dish would you like to try? Let us know in the comments!

SNK has released the two first episodes of “The King of Fighters: Destiny” animated series on YouTube today.

The company has said that the series will consist 20 minute episodes with 24 episodes in total.

You can check out the first two episodes and overviews below.

The King of Fighters – The world-renowned tournament starts now! After arriving in South Town, Kyo, an invitee to KOF, runs into another formidable fighter, Terry. Ten years have passed since the tragedy that changed his live forever… The destinies of the fighters now cross here in South Town.

When Kyo, Benimaru and Daimon visit the Kyokugen Style Dojo in South Town, they come across Ryo chasing down men in black suits. Kyo and his friends head off to Geese Tower in pursuit as well. Once they arrive at the tower, Geese’s right-hand man, Billy descends on them.