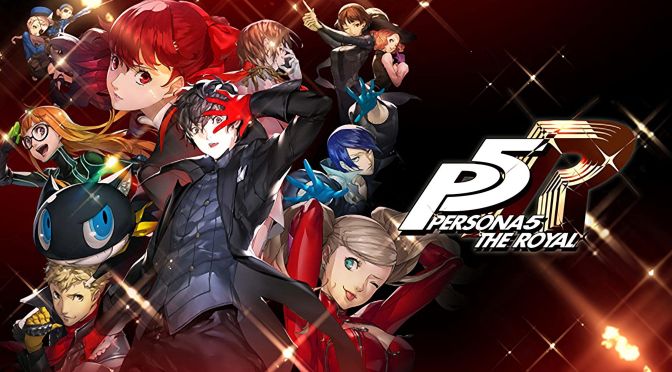 I remember the teaser trailer: the same cast, but a new female character? Would the game get a release with a female protagonist like Person 3? Would Yuusuke finally be my partner in romance?!  Most of us were likely pretty disappointed to find out that the re-release of Persona 5 would not include a female protagonist, but instead, a new character for your team.

The real question is, would it be worth it to pick up the game just to have a new character on your team?

For those new to the series, Persona 5 follows the Protagonist and his group of friends as they infiltrate Palaces (places of an individuals distorted desire) and force corrupted people to have a change of heart – confess to their bad deeds. The player maintains a regular life, going to school, taking exams, working part time, etc. (basically, however you want to play) while infiltrating palaces after school.

Persona 5 Royal switches up the story quite a bit. The new character appears in the beginning and her role in the game starts to reveal itself. For the most part, the core of the story is the initial release of P5, but there is a variety of additions on the side. If you played the game before, you will be able to identify where the story goes off track to fit the characters in. If you are new to the game, you would not be able to tell the difference.

Fortunately, the female character is not the only new character in the game. We also have a chance to meet Jose, the white haired robot-boy who resides in the Thieves Den and Mementos as well as some other faces.

I will be honest; I was not interested in picking up Persona 5 Royal because I was not up for playing the game again. My first play through took me 1 year and 100+ hours before beating the game, so I wasn’t sure if I wanted to fit this into my schedule (I really do wish I had that sort of time to dedicate to games!) However, the new features added to the game are worth another play through.

P5 Royal has eliminated many things that I found downright annoying in the first game. For starters, when a Shadow is defeated, I can skip the entire results screen animation. My original play through, I mashed X in hope that the game would just go… a little bit faster… Although commentary from Morgana can really get on my nerves, it is now helpful when it comes to bargaining with Shadows. I usually went in not knowing which way to respond. Morgana gives you a hint to the temperament of a Shadow so you can better guess how to get them to join your team – without resorting to one of the various walkthroughs. I also hated the limitations Morgana had on your actions at night. Rather than only being able to sleep after visiting a Palace/Mementos, the protagonist has options that expand the character skills in the cafe before going to sleep. This is helpful when it comes to building skills since visiting a Palace/Mementos is basically your activity for the entire day in the original version.

Battles have been modified to encourage you to use the baton pass. I never used this feature in my first play through because the button to trade off was not so easily accessible. And even if it was, I did not have much motivation to use it. And bullet usage! I never used my gun because ammo ran out too fast and it was basically, pointless.  Bullets re-load and you’re no longer wandering through the palaces ammo-less.

The game has also added special Shadows that act like bombs. Defeat them and they explode, damaging the surrounding Shadows. The battles are strategic, but also too easy.

The Velvet room also has an additional challenge mode. The protagonist and team battle personas for prizes, aiming to get a high score for more in game item swag.

The Thieves Den is a side location to kill time. You can view videos and other achievements. This part is not that exciting, but the part I do like is playing Tycoon. Tycoon is a card game you can play with the other characters. So far, I have spent an absurd amount of time trying to master the game.  The more you progress, more things get added to the Thieves Den. 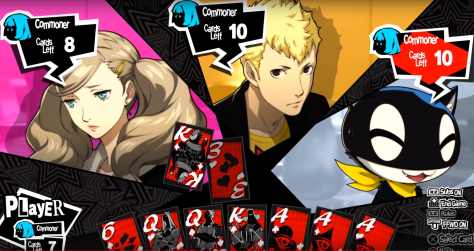 The new character, Jose, mentioned above also adds more to Mementos. Reflecting back, there were many things I did not care for in the original release. The additions bring us back and add a little more to the tedium. I did not enjoy going through Mementos. The collector in me needed to unlock all sections of the map for hidden treasures, grind for cash, and level up, but the player side just wanted the story to progress. Jose brings more activities to Mementos by asking the protagonist to collect flowers. X amount of flowers will buy special items and each of the items are definitely worthwhile! SP replenishers help when you want to grind through a castle. 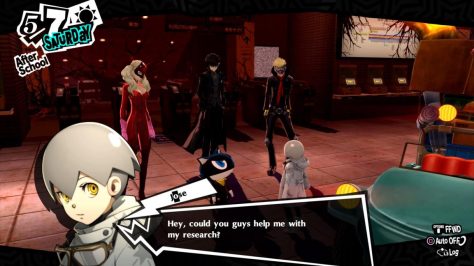 More characters means more social links means more side stories and more persona types to unlock which means there are new skills you can use throughout the game! P5: Royal gives you so much new content that while you are comfortable with the interface and know what you need to do, the game still feels “new”.

I cannot say I have noticed much difference in audio in and graphics. The game, overall, maintains its attractive style, snazzy UI, and P5 soundtrack.

Pros: There is so much new content to the game; it is worth going back, going down old routes, but also visiting new ones. P5 Royal removes all of the mechanics that felt tedious and annoying from the original release, making a second play through (or even a first play through) more enjoyable.

Cons: Some of the new additions to the game do not really do anything. I like the addition of Jose and the Thieves Den, but his role does not really do much. It’s the same game, but with more things added to it.  If you’re not a huge fan, a second play through may not be desired.

I would rate this a 9/10. At its core, Persona 5 is a fantastic game. It was still fun to play, all of the things I hated, mechanic wise, were removed, and you get another chance to play through the game and make different decisions!

Have you picked up P5 Royal? Do you plan to? What are your thoughts? Let me know in the comments!