Psycho Pass: Mandatory Happiness is available now on Steam!  Are you ready to re-enter the world of Psycho-Pass?

Taking place during Season one of the anime series, Psycho-Pass: Mandatory Happiness introduces two new characters: Enforcer Takuma Tsurugi or Inspector Nadeshiko Kugatachi.  Enforcer Tsurugi is searching for his lover while Kugatachi has lost all memories of her past.  You follow each detectives through a series of events that eventually lead to Alpha, an AI whose goal is to provide happiness to all humans. 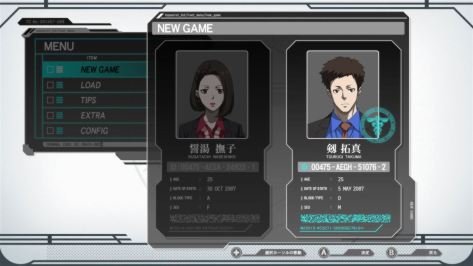 I am not quite sure how I felt about the story.  I enjoyed the concept of a rogue AI trying to create happiness the only way it can understand; a path of pure lethargy where decisions that would create unhappiness cease to exist.  I wanted to see what would happen with the AI, and furthermore, the connection between the two new characters to the AI.  I feel like this is where the story falls short.  Either because the concept of Psycho Pass itself forbids the exploration of the characters (searching into the past will cloud their hues making them latent criminals) or the characters themselves weren’t as developed as I had hoped they would be.  I was also slightly annoyed that detective Ginoza was so hot-headed.  I felt like it contradicted the character established from the anime series.

Visual novels are not heavy in graphics and Mandatory Happiness is no different.  The story takes place inside the Public Safety Beareu headquarters and in the newly introduced city Sado Marina City. Some scenes are rendered as they were in the anime but the general landscape of the game felt extremely lacking and most scenes were reduced to only dialogue. Cut-scene art was far and few between; and even action scenes were merely sound effects. There were quite a few scenes that could have benefited from a more detailed cut-scene; it would have drove home the drama just a little bit more.  While I understand the series itself takes place in a bland dystopian Tokyo landscape, I felt like the game could have used more imagery to bring the game to life.

I can’t say the sound track brought about anything new to the series.  Sure, helicopters and other background effects were utilized, but at a minimum.  Every now and then when I was prompted to make a choice, the music tempo increased to show the intensity of the decision, but otherwise, there was nothing noteworthy.

Visual novels are basically pushing “enter” until you are prompted to make a decision and the decision is what determines your course at the end of the game.  After playing nothing but romance visual novels, I came to realize that it’s damn near impossible to get good endings without a walk-through and that’s the fun part about them; it’s why I keep going back to the story because I like to test out each and every option to see where it leads.  I felt let down when my final choice in Mandatory Happiness felt like the only thing that determined whether I got a True End or Bad End.    Even after saving a few time and going back to change my decisions, the story progressed essentially the same way, say for one or two things. The decision line felt very linear which took the joy out of playing a visual novel. I questioned whether there was a point to monitoring my hue (which you are frequently prompted to care for), if my relationship with the other characters even mattered, and whether or not my choices in the game really made a difference to the outcome.

I think this story would have been a wonderful release between season releases of the anime series. After having watched the entire series and sobbed like a baby, the desire to be placed back into the Psycho Pass world is long lost.  However, I think anyone who has been newly introduced to the series would certainly enjoy the story of Mandatory Happiness.

Visuals, audio, and game play were a let down.  I would have enjoyed alternate endings, or at least a path that made me really question my decision making though the game.  After my first play through, I thought Mandatory Happiness would have made a wonderful novel instead.

I played this title on Steam.  Steam has a vast collection of visual novels but I always feel like they’re better off on a portable console versus PC.  If you’re used to playing on PC, looking to expand your Steam library, and just love Psycho Pass, this is a great buy. However, I think it’s a better fit on the Vita.

Are you a fan of the Psycho Pass series? Will you be adding Mandatory Happiness to your collection? Do you like playing Visual Novels on your portable console or PC? Let us know in the comments!