Not going to lie, I played the pants off of Persona 4: Dancing all Night.  I went as far as getting all the trophies and buying all the DLC.  Now, Persona 3 is definitely my favorite in the series, with Persona 5 coming in at 2nd so I was ecstatic when I heard they were also making a music game for those titles!  Did the games live up to my expectations?

What I loved about Persona 4: Dancing all Night was the story.  It was as though it was a side story  that brought the team back together again after the adventure was over.  Not to mention the introduction of new characters, Kanami Mashita and the idol group Kanamin Kitchen was a nice touch. Sure, the dialogue and plot were kind of cheesy, but it gave you a goal and a new mission; dance your butt off to satisfy the shadows!  Something about the tone of the story combined with the remixed soundtrack made the game a fun experience: there was a theme, there was a resolution!

Persona 3 Dancing in Moonlight and Persona 5 Dancing in Starlight didn’t quite live up to that expectation.  The team has been taken to the Velvet Room for a competition but no cast members will remember what has happened in the Velvet Room when they wake up which makes this story null and void to the series.  It’s not a supplement, just an extra game.  There is also no variance in story for either title; the story for each game is essentially the same, just with a different set of characters. This simplifies the game, but at the same time the plot for the two titles doesn’t feel, in any way, compelling.  Sure, a dancing game doesn’t really need a plot, but I thought it was an aspect that made Persona 4: Dancing all Night stand out and I was hoping to see again with Persona 3 and Persona 5.  I really wanted to see what creators could come up with for each cast… 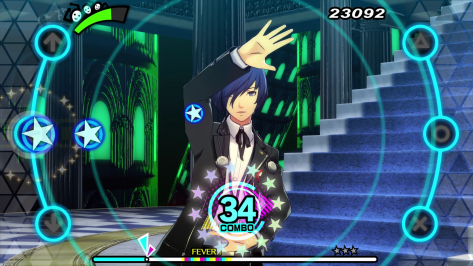 The story is not essential to enjoying the game.  I just thought it would have been a nice touch to include a unique story that pertained to each cast, similar to P4: DAN.

If you played Persona 4: Dancing all Night, then picking up Persona 3 and Persona 5 will be a piece of cake.  Game play is simple in that you have icons that move outward from the middle and you need to push the corresponding button(s) on the left side, the right side, or both at the right time. You can get a “Perfect”, “Great”, “Good”, or “Miss” based on how accurate you hit the notes. Notes are the same as P4: single note, double note, hold, and scratch.  Persona 3 and 5 have added an additional double-tap note which is easy enough to pick up.

What I forgot about the Persona dancing games is the pacing is not as fast as other music games. Notes do not feel like they’re flying at you at inhuman speeds.  For me, this was difficult to keep up with since I am not used to actually watching the notes crawl into place; I use my gamer sense and mash accordingly.  To compensate, I added a modifier which speeds up the notes.  Slower notes movement is an aspect that might be fun to players who love the Persona series, but aren’t too big into music games and who do not play them regularly. 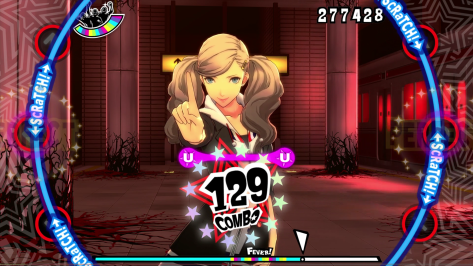 Like the previous entry, you can change the game by adding modifiers.  Some modifiers will help you in the game, or make it more challenging.  Helping modifiers subtract from your final score, and challenges will add to your score.

The criteria that determines whether or not your passed a song is very unclear.  P3 & P5 play similar to P4 in that you need to get the crowd excited, but it’s hard to determine if you are.  Maybe I am still salty, but I had nearly a full combo and missed (not hit it too late/too early) 2 notes toward the end of the song and did not clear it! I played the same song again, with weaker combos and hit rates, and passed the song…

The overall game play is very fun for both titles.  The downside: both games are EXACTLY THE SAME.  This is down to the modifiers and social link criteria.

I’ll be pretty honest and come out and say that I am not a big fan of any Persona sound track.  Persona 4 was a lot of fun for me because of the remixes.  I jumped right into Persona 5 since it was the latest and freshest in my mind, but I just could not get into any of the tracks.  Jumping into Persona 3, though, was much funner since the audio tracks have a more up-beat music game sound to it.

Each game has around 25 songs, and follow the same pattern where you play four songs with individual characters, and then get either an animated song, or group song. This pattern follows until the end, where you get the concert rendition and then the “final” group dance song where all characters are dancing in the video.

I played P4 on my Vita so the transition to PS4 was much welcomed.  The graphics have been enhanced and there’s an increase in the frame rate for all 3 entries.  You may need to adjust your TV settings and calibrate the buttons to ensure there is no lag.

Pros:  The game is addicting, easy to pick up, and revisits the cast from P3 and P5 titles. When playing you feel compelled to challenge yourself to see if you can get a King Crazy combo or beat your previous score.

Since the story is simplified, you don’t have to sit through a story plot that may or may not be interesting to you.

While you can unlock social links and get more items, it’s not really a requirement to go through them.  You can play through the songs as normal.  Social links are only relevant if you like modifying your characters and unlocking items. 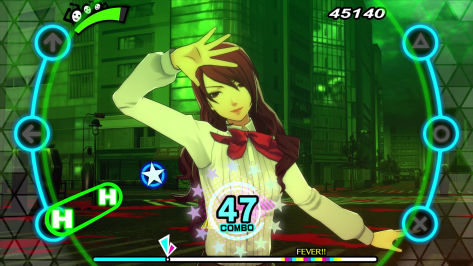 The sound tracks are unique to each game and you can play through some really awesome remixes of your favorite songs from each title.

I rate Persona 3: Dancing in Moonlight and Persona 5: Dancing in Starlight an 8 out of 10.

I don’t like how both titles are basically the same game.  If you want to save money, you’re better off picking your preferred cast and picking up that title.  But despite the sameness, the overall game play and game structure is still a lot of fun and worth the price tag (for a single game).  There is a lot more to the game than just dancing and you’ll enjoy going back down memory lane when you hear your favorite jam.

Have you picked up either of these titles yet? What did you think? Which is your favorite Persona game? Let us know your thoughts in the comments!