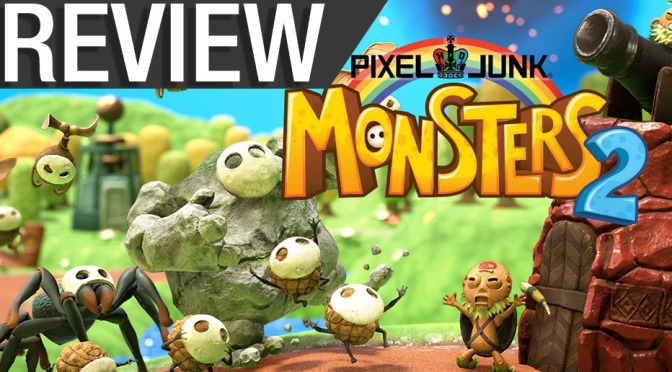 I’m not a Pixel Junk junky, but I have to admit, Pixel Junk Monsters is one of the funnest, yet most infuriating games I always find myself jumping back in to.  I was thrilled to see a follow up was coming out.  Does Monsters 2 exceed it’s former counterpart?

Please note: the game calls them “chibis” but I will always, and forever, call them tiki babies.  This term will be used throughout the rest of this review. Just saying.

The point of the game is to protect your tiki babies at your base from the swarm of monsters trying to attack them.  In order to do this, you must build an arsenal of defense towers to kill the monsters before they are able to get to your base and eat the tiki babies.

The game relies entirely on strategy. There are different types of defense towers that need to be used against certain types of monsters (i.e. ground, air, air/ground).  During the swarms, you’ll need to plan your line of defense and build based on the type of monster that will be coming or which monsters you know will be coming. Building is limited since you need to collect coins and gems in order to build the defense towers. You can collect these by wandering through the trees or gather them after a monster has been killed.  During raids, you will also need to upgrade your towers.  You can do this by using a gem you’ve collected from a monster or stand on a tower to level it up – the stronger the tower, the stronger the defense! You have to work between building, upgrading, and preparing for what is coming.

Two-player co-op was an option of PSP players who each had their own PSP, but Monsters 2 allows for co-op on one screen for up to four players! This can get slightly chaotic since players need to be within a certain proximity to player 1, but it allows couch cooperation -you definitely need to communicate with your team to know what you plan what you need to build next, where to upgrade, where to invest your coins/gems.

With the addition of up to four player co-op, there are new features to use within a level.  If you have enough gems you can purchase a fruit (during a raid) that temporarily buffs up your character.  On top of that, there are interactive items in the level, such as boulders, that you can use as a backup line of  defense.  The game also throws in some challenges at you for certain. For example, you won’t be able to collect coins from monsters throughout a raid.

Aside from the game play additions, there’s a really fun cosmetic feature that allows you to change the mask and shield of your tiki man.  You can purchase masks by collecting coins after completing a level.

The most notable graphic difference from Monsters is 3D graphics which creates more dynamic levels.  Rather than an overhead view, you get to explore the area. Otherwise, not much has changed in terms of character or monster design.

What makes this game so easy to get in to is the relaxing audio track. The tracks are similar to the original Monsters which brings back waves of nostalgia (if you played the original).  The track will change when the final monster approaches, but not to the extent where you feel stressed to build your towers -only to defend your precious tiki babies!

Pros: The game is addicting, fun, and easy to pick up.  Despite getting furious when your tiki babies get eaten, you’ll still jump back in to the level with a different plan of attack.

Cons: I know I shouldn’t complain much, but the new levels feel less challenging compared to the predecessor.  After about one unsuccessful raid (meaning only 1 tiki baby was eaten), it was easy to grasp where you needed to build and what needed to be leveled up.

Although there is an option for multi-player, only player one gets to modify their character with a new mask and shield.  It’s almost unfair if you’re stuck being player 2.

If you like Monsters, and Pixel Junk games, this is definitely worth the buy.

Do you have a favorite Pixel Junk title? Let us know in the comments!