Mushroom Wars 2 is one of the cutest, yet most intense RTS I have played in a long time; actually, since the first title. The first Mushroom Wars title was released on the Playstation 3 back in 2009 and later was on other platforms such as Mobile and PC years later. The newest entry in series still holds up to original with its new mechanics.

When jumping into MW2’s story mode, you are thrown into a story with no words, narrator, or any sense of guidance which is great because instead the story presents itself with images that the player has to interpret themselves. The story is not meant to be central to the game, but it is their to give players an idea of the reason your little mushroom people are at war.

Taking a lot of  influence from the cutesy look from the first title, Mushroom Wars 2 adds a little more depth by revamping the visuals to looks as though the mushroom people grew up to battle. The new art style is all digitally drawn adding a stylized aspect to character portraits, maps, building and attacking units; this title will have players loving all aspects of the style, as well as feeling more attached to the team they build. 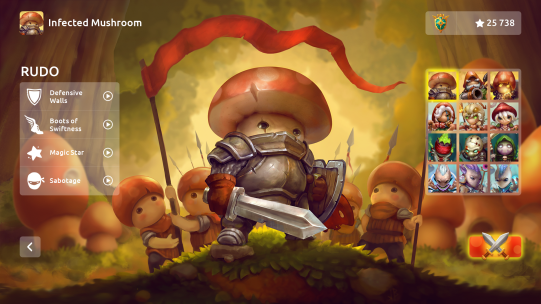 If you have not played the first Mushroom Wars title, I highly recommend checking it out, as it will prepare you for the addicting game play that Mushroom Wars 2 builds off of. That being said, Mushroom Wars 2 is a straight forward RTS (real-time strategy), which is simple to control but yet technical with strategy.

When in game play, players will have two main hubs. One hub to choose how many units to send out by percentage of the total units in the building, and a hub to upgrade/switch your building. This is where all the strategic planning begins to take play. Players will be able to decide to upgrade the building to build units faster, or to build a cannon tower which will defend an area but sacrifices building units. And then there is the defense building, which will make your units and building have more resistance to attacks and do more damage.

You have to plan your buildings wisely because your enemy will be attacking and planning at the same time.

One of the newest addition to Mushroom Wars is the abilities. Depending on the characters or team the player decides to select, a few curtain skills will be attached to them. This will give players different advantages to take over the map.  This is an excellent new feature because of how balanced it is.

The game play is fun, addicting, and players will find themselves losing hours of time in the main story mode, which feels like a tutorial and doesn’t ever get annoying while making your way through. On top of that, the online mode runs smooth and will have players trying to rank up in the online community.

Mushroom Wars 2 feels like an upgrade to the previous title with it’s great style, addicting RTS game play, and new game play elements.  I can say this title is a must buy for the price ($9.99) for anyone and everyone. The simple but yet well thought out game play will have any gamer enjoying the battles. Be sure to be on the look out for a release on PS4, Xbox One some time i the future. My verdict of this title is a 9/10.