The wurm is back, and ready to feed! Messhof is back again with the sequel to the 2014 highly addictive multiplayer title Nidhogg. Nidhogg 2 builds off its predecessor by adding some new weapons, new levels, new grotesque art style, online ranked matches, and a brand new character customization feature letting players choose which character they will want to use to paint the walls with their enemies’ blood. 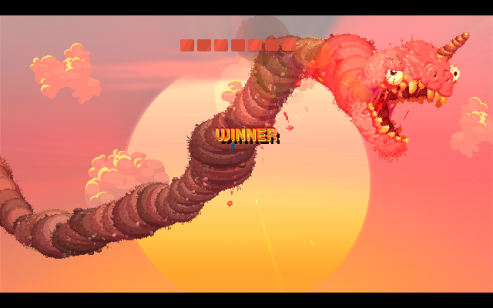 Nidhogg 2’s art style has been upgraded from the retro “Atari” art style, to a 16-bit pixel upgrade. The best way to describe it is that it looks something along the lines of Earthworm Jim’s art style from the SNES and Sega Genesis era. This fits perfect for Nidhogg 2, as the game doesn’t take itself serious with its hilarious gameplay.

Characters animations look hysterical with the frantic facial expressions when being stabbed or squashed into the ground, and the level art looks amazing with its acid influenced art style. The whole presentation of Nidhogg 2 will have you feeling like your back in the 90’s gaming era. Did I mention, the developers added an overworld that resembles Yoshi’s Island!

One downside though is that even though the graphics are brushed up, sometimes they game be distracting. Their were times on curtain levels where the background would be the same color as me or my opponent (DAMN those flames with the same color palate as the orange character) and I would either lose myself , then fall off a ledge or run right into my foes weapon.

Nidhogg 2 has brought back that fast paced, kill and run game style back, but this time with a few new feature! Nidhogg 2 introduces new weapons which will change the strategies of how to kill your opponent. 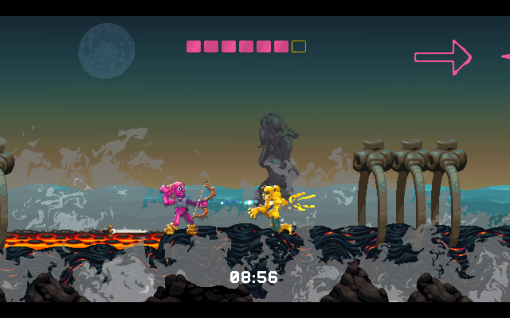 Each weapon has its own strength and weakness so despite which weapon used, one player will not have the upper hand. The knives as a fast throw but short reach, the bow has projectiles, but you can do damage if you toss it, the two-handed sword can know weapons out of you opponents hands but is slow, and the classic jousting rapier is neutral all around.I found this dynamic and rather fun, as I would find weapons from fallen characters all over the place, making me have to think quick on what I was going to do with the weapon.

As for game modes, they added an arcade mode where players will fight their way through every level and have a chance to try out every weapon. Which is a great option if you don’t have some couch play going on. There is also an online mode with ranked and non-ranked matches, and I can see this keep this title alive for days to come. Last of all, the main place where players will be on is the original VS. mode and tournament mode, in which players can play against their friends and have a colorful bloodshed of a time.

The NCG crew had a blast playing Nidhogg 2, but the game animation felt like it wasn’t as fast as the original Nidhogg. On top of that, some matches last forever, as players will find out that they added sliding physics to the characters. This can be great, but can also fall flat when your matches end up being way longer than you would expect. Other than the speed of the animation all aspects of the gameplay aspects were great. 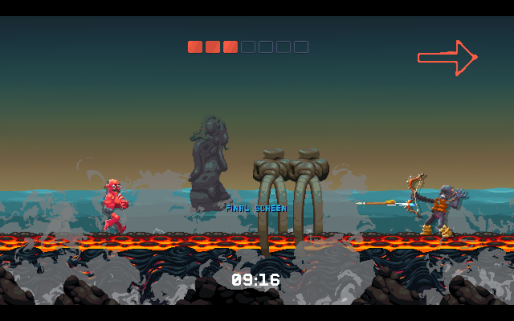 Nidhogg 2 is a title to pick up whether you tried the original or not. A highly recommended title to add to your multiplayer collection, especially because it’s a game that is just hilarious, with an experience you will not get from any other title on the market.

Pros: Nidhogg 2 offers a variety of weapons and levels that we did not see in the first title.  There are more maps with obstacles and the weapon variation forces players to strategize their next move versus bashing buttons and hoping for the best.

Cons: Even though I got what I wanted more levels!- I still prefer the style of the original game.  The pure simplicity in levels and character design made the game “goofy” without being outwardly goofy.  Nidhogg 2 takes the once subtle concept and makes a more “in you face” style and I think it detracts from the game.  It becomes mentally exhausting focusing on your character and the more in-depth backgrounds.