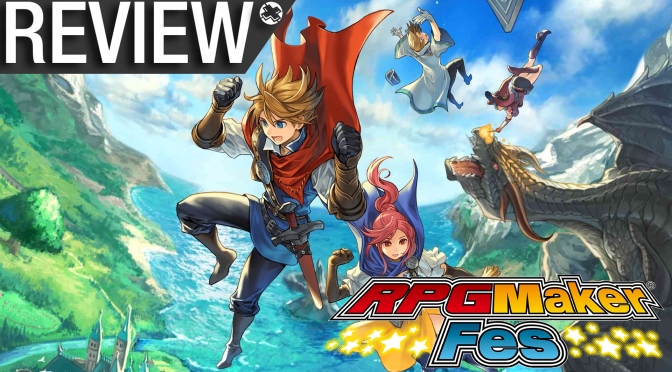 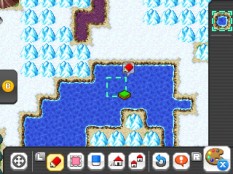 Players will be delighted to see how technical the tools can get when starting to make their JRPG game, and will also be grateful how simple it is as well. From character creation, story, dialog, and map making, RPG Maker FES will have fans of the genre spewing new ideas out. One of the spots I found myself dedicating a lot of my time to was map making. Trying to make the perfect map, enjoying how simple it was to tweak the map,  and even adding a dungeon/town was really rewarding and sparked new ideas to evolve what I created.

From the start, you have a set amount of objects, terrain, and landscapes to select to create whatever you want ranging from dangerous snowing mountains or enchanted lost forests. One of the most useful parts, after setting objects down, is actually deciding which objects lead to the next section and where your collision detection will lay. These were tools that surprised me, just because it made it felt like I was actually designing a real game to be released. 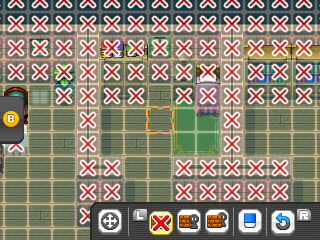 After creating the scenery, the next step is to add the soundtracks to each area. This was were I felt disappointed. Even though you get a handful of background music and ambient sounds, your limitation is choices from the fantasy pack (sorry sci-fi fans, you will have to wait for the DLC). Besides the limited pack sounds and music, you have even more in-depth options to work with, such as the character, party, NPC, and enemies creation tools. 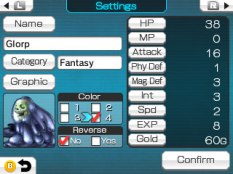 The character creation tools were great to tinker with, from the names, nicknames, profession, character descriptions, and even how the characters level up. There are thousands of ways to make your story.  The only downside, you cannot create any original sprites or even portraits. You have to rely only on the presets you are given. At least until you are able to buy the DLC later down the line for other preset packs. RPG Maker also has tools where you can create special skills, weapons, and items similar to how character creation works. Just like how you cannot use original sprites or portraits for characters, you also cannot use them for weapons and items.  I would have loved to create an original character, sword, or healing items, but I could understand that people would probably recreate these from other licensed universes, and devs usually don’t like to deal with legal actions from it.

RPG Maker FES is a great title…tool for the 3DS, but isn’t for everyone. It is more for the players who want to create, write, and make their own world to share with who ever else owns this title. I have to give RPG Maker FES a 6/10, mainly because it is an RPG maker, but lacks in some creation areas that are important to anyone who wants to make an adventure that isn’t too generic.