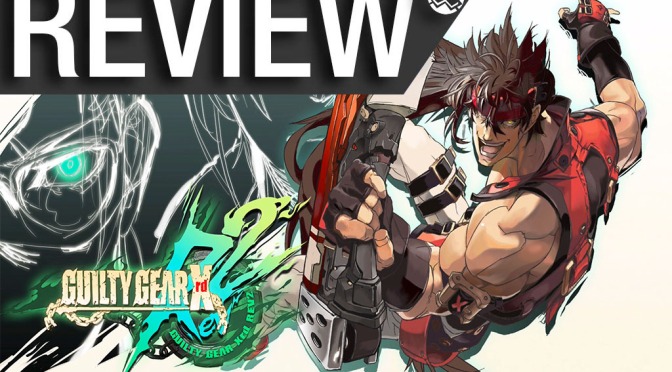 Being one of the main fighting games at EVO 2017 this year and coming almost a years after Guilty Gear Revelator, an updated version titled Guilty Gear Xrd Rev 2 joins the franchise. Adding 2 more characters, new moves, and new balancing to the gmame, along with an extra chapter to the story from the last game, Revelator 2 will keep players learning more ways to punish their opponents.

Guilty Gear Xrd Rev 2 is still the best looking fighting game to date, with its 2D feel and 3D rendered characters. During gameplay you can instantly see the difference from the previous Revelator. With the newly added dramatic angle drops before each battle, new stages which are lit up and gorgeous , Rev 2 visually looks stunning.

Stepping away from the gameplay, Rev 2’s menus had a color swap as well as some touch ups. One of the main touch ups is the online menu . Players can now easily queue up in ranked matches as well as player matches from the easy to navigate main menu. This is a big update from the previous entry, as it is no longer needed for players to go into a lobby to wait for matches.

Guilty Gear Xrd Rev 2 added a few new tracks to the fast, heavy and adrenaline pumping J-rock music soundtrack that will have you ready to challenge other players. With a track list consisting of character themes, from previous entries, you will understand why the game says “Let’s Rock” before ever match. There will be times when you find yourself staying on one track just to pump yourself up during a matchup. For anyone who loved any of the older titles this is hands down one OST to add to your music collection.

The fast pace gameplay that the Guilty Gear Series is known for is still here with new balancing and new move sets. Adding 2 more characters to the roster, one being Baiken, a fan favorite from older entries, and the other named Answer, a newcomer to Rev 2, this update will have you playing, and learner new combos for hours.

As I mentioned before, the online menu has been updated, so now when players play ranked matches they can take part of a best to 3 set of matches. Something that was taken from Street Fighter V, and I recommend any other fighting game title should add as well. This is one of the best parts from Rev 2, as it helps keep the online match flow consistent and competitive. For players not looking for online play but more to the single player experience, Rev 2 has also brought back a new chapter for the “Cinematic Story Mode”, which I am not going to spoil but is well worth your time.

With the fantastic visuals still here, new characters entering the roster and new moves in Rev 2, this is a must have to anyone who is a fan of the Guilty Gear franchise or wants to keep up with the fighting game community. As for new players who missed out on the previous title, I highly recommend picking this title up, as it is one of the best looking, and best technical fighting games out there. As for a score for Rev 2,  I have to give Guilty Gear Revelator 2 a 9 out of 10.