Touhou titles have been making a big appearance in 2016 with Touhou: Scarlet Curiosity is being the latest to be localized. Published by XSeed Games, and released on the Playstation 4, Touhou: Scarlet Curiosity takes a blend of an action swordplay JRPG’s of the Ys series, platformers, and combines them with the bullet hell shoot’em up genre that Touhou is  known for. Players will take on the role of the titular vampire Remilia Scarlet or her devoted maid, Sakuya Izayoi, as they explore a wide variety of environments and battle aggressive creatures. 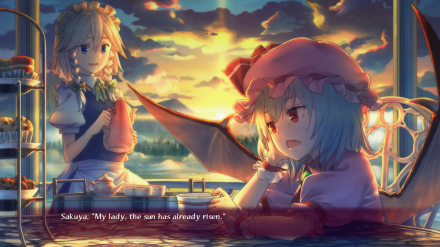 Touhou: Scarlet Curiosity begins with the “Scarlet Devil” Remilia Scarlet, who, at 500 years old, is desperately searching for something new to end the monotony of immortality. After stumbling upon a newspaper article about a powerful and mysterious monster terrorizing the countryside, she rushes out to see if this could finally be the excitement for which she yearns. Unfortunately, not only is she unsuccessful in her search for the monster, but she returns to find her manor in ruins. It would seem the monster has come to her! With a renewed sense of determination (and a much-needed respite from her boredom), she vows to take revenge on this fiend and make it pay!

Touhou: Scarlet Curiosity has the normal anime look with  hand drawn characters for the dialog sequences and looks wonderful with its 3D models for game play. When playing the, players will notice how magical girls look somewhat dated but the environments look beautiful with fantastic lighting effects from battle and background. Touhou: Scarlet Curiosity is a light show of different magical colors and and will have players watching with awe.

Touhou games always have a superb soundtracks, and Scarlet Curiosity is no different. The music from Touhou: Scarlet Curiosity will have players drawn to the environments with its matching tone and mystical feel, but there will be a few times the music can sometimes be ill-fitting for the scene. Aside from that, I feel like the music selection stands strong for itself and will help attract players to the game. I would even recommend players listen to the soundtrack before playing the game.

Touhou: Scarlet Curiosity has a Falcom-inspired action hack and slash feel to it, but with its own touch. Mixing the top down action JRPG’s elements with platforming, players will be going though each level attacking foes to grind their level up, solving puzzles to proceed the well crafted stages, and equipping items found along the way to build up your characters stats.

When first entering the game players will notice is there is no difficult setting to the game. This leaves the players not knowing what to expect. All players have to go off of is that you have projectile attacks and slashing attacks for each character, but these skills can be changed to even more powerful attacks as you level up. I found this to be one the well done aspects of the game and had me wanting to kill everything in sight. But, as I mentioned, there is no difficulty setting. Players will notice right off the bat, this game is not that hard and as you make your way further in the game it starts to get repetitive with the same enemies on every map. This is where the game lacks, it just needed more diverse enemies to fit each maps theme. But not all of the combat was  it makes up for it in its boss battle.

Boss Battles felt like the game went up in difficulty, adding plenty of deaths just to have you try over again. This is where the game shines by having the boss attack’s bringing in the bullet hell genre to the game. You will find yourself dodging tons of projectiles, figuring out each bosses shoot patterns, and different ways to counter attacks. This is where players will find the more intense aspect of the game.

Touhou: Scarlet Curiosity is a beautiful looking game with a fantastic soundtrack and a decent story, but the gameplay lacks in some areas. The boss battle were very enjoyable, and the puzzles were entertaining, but I would recommend this game to fans of the Touhou Projects, and maybe fans of the Ys style games, otherwise this game is developed purely by the fans, for the fans.