Normally I don’t get too excited over the re-release of a game.  However, Dragon’s Crown Pro was a title I didn’t mind revisiting.

Jumping back into the game I had forgotten not only how beautiful the world of Dragon’s Crown is and how addicting the chaotic game play can be.

Enhanced for the PlayStation 4 Pro, the graphics look stunning! Visuals have been retouched to give the art work and style of the game more clarity.  The game design and art work in itself is already outstanding, but the enhanced graphics lure you back into the Dragon’s Crown world.  You’ll find yourself wondering why you left it in the first place.

The original soundtrack to Dragon’s Crown set a unique tone and atmosphere for the game.  Dragon’s Crown Pro has taken an already wonderful soundtrack and re-recorded it.  Composed by Hitoshi Skaimoto and supported by a live orchestra, the new soundtrack enhances the gaming experience.  I usually don’t pay much attention to the soundtrack and use whichever tunes are playing on default, but switching it up in the latest version added a more refined element to the game. I think it’s an aspect music junkies can appreciate. Of course, you also have the option to use the original sound track if you don’t care about all the fancy new stuff.

What I absolutely love about this re-release is that I don’t have to start the game all over again! You can cross-save your saved data from the PS3 to the latest version so you can start adventuring where you left off.  You basically adventure in the same areas multiple times anyway, but it’s nice to keep your items and characters.  I’ll admit, I would have been heart-broken if I didn’t get to keep my Sorceress, EstllaR.

For those who might be new to this title, you select your character (Fighter, Amazon, Wizard, Elf, Dwarf, or Sorceress), assemble your team, and fight your way through dungeons. Each dungeon has two paths you can take, one usually more difficult and challenging than the other.   Your ultimate goal is to gather the crystals from each dungeon and defeat a dragon.

There are many aspects I enjoy about this game. For example, the game is very balanced.  There’s a limit to how many times you can use an item or even your main weapon. I chose the Sorceress first, and I had to balance attacks, magic, and recharging my MP to attack. On top of that, items can weaken or break after too many uses. Adventuring through a dungeon also doesn’t guarantee you will obtain the crystal.  There are different criteria you must meet when battling a final boss in order to get the crystal.

The only major downside to the game is how repetitive it can become; you ‘ll have to adventure through the same dungeons multiple times if you fail to meet your goal the first round.  However, there are a lot hidden pathways and treasures within a level.  On your second or fifth round, you might find something you missed the first four times. 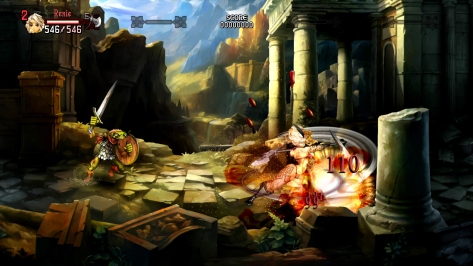 Upgraded crisp graphics that reveal the details of each hand drawn character and a new soundtrack bring you back into the world of Dragon’s Crown. On top of that, you get to keep your saved data from other consoles and cross-play/cross-save to your heart’s content.

Aside from the updated graphics and sound, there really isn’t much new to the game.  I’d have liked to see new characters and new levels.  There’s nothing that really feels “New” to the game. To compensate, DLC content will be released but I think it would have been nice to see it included with the re-release of the game.

If you haven’t had a chance to play Dragon’s Crown, definitely pick up Dragon’s Crown Pro for the PS4.  The hand drawn art style is stunning and the game play is fun and addictive.  I always find myself poking around the screen to find hidden treasures and seeing what I can unlock from the runes.

If you’re a returning player, the buy may or may not be worth it. You don’t lose any of your data, however there are no real new elements to the title.

Do you like Dragon’s Crown? What is your favorite Vanillaware title? Let us know in the comments!