XSEED Games has announced that SENRAN KAGURA Peach Beach Splash, the much-anticipated summer-themed title in the beloved busty brawler series, will launch for the PlayStation 4 in North America on September 26. The series’ five-year anniversary celebration continues with the surprise reveal of the PlayStation Store exclusive “Sexy Soaker” limited edition and themes.

The company has also revealed a new “Sexy Soaker” digital limited edition for $59.99 that includes the game’s digital soundtrack and a redeem code for the following downloadable content: the “Soaking Wet High School Uniform” costume, a set of colorful bikini costumes, the “Futomaki Roll Bazooka” special weapon, a “Bebeby” pet card, and a special set of skill cards. 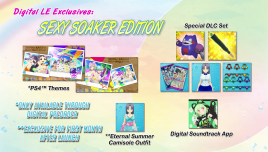 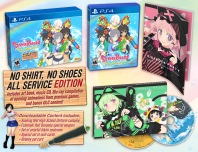 All pre-orders for both the standard and limited editions of the digital version at PlayStation Store will include exclusive “Peach” and “Beach” themes, as well as the “Eternal Summer Camisole” in-game costume in sky blue, which will be exclusive to pre-orders for four weeks before being made available for purchase at $3.99.

In addition to the digital standard and limited editions, the game will also be available in a “No Shirt, No Shoes, All Service” limited edition for $69.99 including an exclusive art book of the girls’ summer adventures, a Blu-ray video compilation of all the opening animations from the Senran Kagura series to date, and a physical version of the Peach Beach Splash soundtrack. This physical limited edition also includes the costume, weapon, pet card and skill card downloadable content items featured in the “Sexy Soaker” edition.

Additionally, for the first four weeks following the game’s release, two additional costumes and a card pack — the “Clean-Up Maid (Mint),” “Clean-Up Maid (Marine Blue),” and “Special First-Print Pack” — will be available on the PlayStation Store for all players to download for free. After the promotional period, it will be sold as a bundle for $9.99.

You can check out the new trailer highlighting the special content below.