As a Banjo- Kazooie predecessor with successful Kickstarter backing, Playtonic and Team 17 has Yooka-Laylee bringing the Nintendo 64 platforming era back for the latest consoles. But does it bring back the problems from that era and can it offer more than just nostalgia for players to enjoy this title?

Yooka-Laylee approaches players with a simplistic and straight forward story made for all ages. The adventure begins with a corporate business called Hivory Towers, with a corporate president named Capital B and Dr. Quack, who start a scheme of absorbing all the world’s literature and converting it into pure profit. This is when Yooka and Laylee jump into the picture because Capital B and Dr. Quack so happened to absorb Yooka and Laylee’s golden pages from their book called “Pagies”. So Yooka and Laylee venture out from the safety of their home to explore deep inside the work halls of the corporation known as the Hivory Towers, to find the “Pagies” needed to explore the mysterious Grand Tomes. 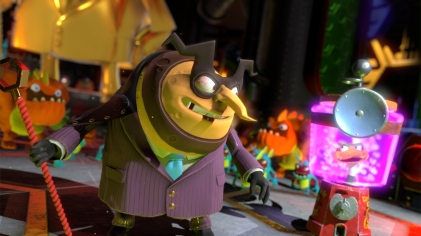 The story works for Yooka-Laylee, mainly because of the game genre, and players will see that once exploring through the game and progressing through the main story. The simplicity of the story was one main part of the game that will have veteran platformer players going back to the golden ages of platforming. Although I enjoyed the story, I did feel like it lacked a lot of the character development for each main character, as it just sort of threw you out there with no history of each character. This would have been a great step away from the past era and bring something more to the reintroduction of this genre.

Visually, Yooka-Laylee looks magical, well developed and all around amazing with the Pixar looking models and spectacular animations for each character. The style of the game will truly bring you back to being a child. Even the environments looked outstanding. The development team behind Yooka-Laylee knew what they were doing and what they wanted to bring back from the 3D platforming era. 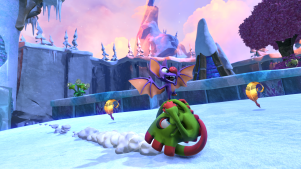 Players will be immersed as the explore the many different worlds in Yooka-Laylee. The only downside is that, there were some spots in the game that felt empty, or not finalized for enemies to be placed. Other than that, I can say the visuals of Yooka-Laylee would get a 10/10.

Music Plays a big role in any game, and Yooka-Laylee scores hit this right in the sweet spot for any game. The music of the game drew me in immediately as it is one of the main ways it helps to tell the story because the game takes the route of Banjo-Kazooie with no actual dubbing for voices. Players will feel each emotion the audio is placed in in section for, whether you’re out and exploring the joyful, energetic jungle themed parts of the game, or simply freezing in the snow zone. Players will appreciate what Playtonic has done with the audio.

As I said before, Yooka-Laylee takes on the route of Banjo-Kazooie with no actual dubbing of dialog, but rather the dubbed the dialog with specific sounds, grunts and other silly noises to portray each NPC or character you run into. This was a great way to have all the characters come to life and seem important to the worlds and, with their silly dialog along with the sounds, you will be enlightened while playing.

With the plan to bring back the 3D platform era with Yooka-Laylee, and making it the predecessor of Banjo-Kazooie, Playtonic had a lot to live up to, and succeeded. Yooka-Laylee is hands down, the new iteration of this genre.

As I made my way through the single player mode, I found myself going down memory lane with the item collection, puzzles, and ability unlocking Yooka-Laylee had to offer, along with seeing a few familiar faces from some recent indie games that recently came out. 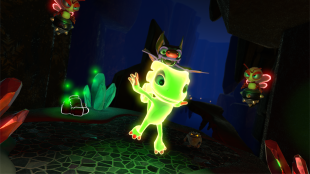 The mechanics of the game work well with the many abilities you must use to solve puzzles, but there were times I got frustrated with the camera not cooperating the way I wanted it to, and some wall detections.

Single player is not the only mode Yooka-Laylee must offer. With a few extra multiplayer modes, you and your friends will find some of the multiplayer games enjoyable. The downside though is that you must unlock the multi-player mode though out the single player story.  I would have liked being able to jump on immediately and play some mini games with a couple of buddies. The bright side though, this does give you a goal to look forward to while playing single player.

For a platformer that is out in 2017, I did wish it had more to offer. Yooka-Laylee brought back everything we love from the N64 platformers and nothing else new. This will be enjoyable to anyone who wants to step away from the everyday shooters, JRPGs that are on the rise, and average open world game that comes out every few months.

With not many platformers out there and a few setbacks, Yooka-Laylee does a fantastic job bringing the 3D platformer genre back. This is definitely a game to pick up for anyone looking to step away from the usual titles that come out every month (I recommend picking it up for the Switch when the port is released). With hours of fun in the single player story, and some multiplayer action, Yooka-Laylee will have players wanting to see a sequel later down the line.