Lince Works, a small indie team located in Barcelona, Spain has released a 3 year project titled Aragami, a third – person stealth game in which you control the shadows, and plan moves using your wits and powers to outsmart enemies, without brut force.

When I first saw game play footage of Aragami, all I thought was, “OMG! A new Tenchu/ Metal Gear Solid style game is coming soon!” For players that don’t know what Aragami, or Tenchu is, these games are stealth action title where you sneak around in the shadows to kill your foes. Exciting right? 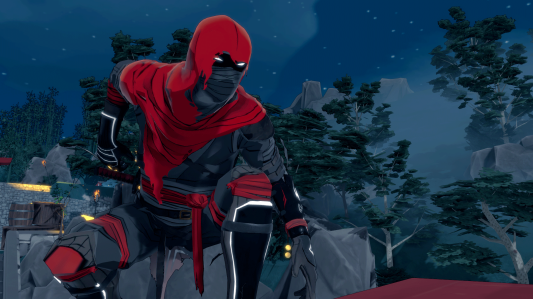 The cel shaded/toon shaded art style of Aragami is a different approach for the stealth action genre. Lince Works used this to utilize the lighting effects and shadows to help give the vibe that makes the game flow.

This also can be negative, though. For instance, the cartoon look may have other players not take the game seriously and can draw them away.

Overall, the approach of Aragami is art style looks nice, and flows well with the game.

Aragami does really well in the audio aspect of the game. Whether you’re attacking a foe, sneaking around maps, or even reading the dialog with the gibberish voice overs, the game feels real. Not much can be said other than the developers have hit all of the audio points on the mark to give players the experience they deserve in a stealth action title. 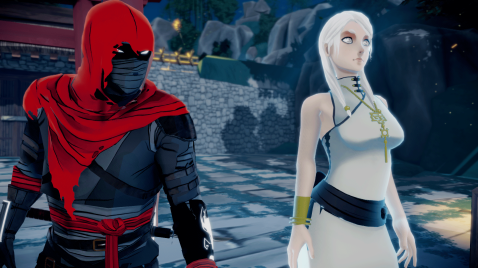 Aragami had my attention from the beginning. Sneaking around using stealth and killing enemies that do not know what’s coming was the main part that sucked me in this title, but after jumping the excitement wore away fast.

When first jumping in the world of Aragami, the feel of the game has everything any players would want in a stealth action game. The AI detection, using the shadows to sneak around, stealth kills, and drawing enemies towards you with distracting sounds; yes, it’s all here. But after a few chapters, players will feel like they need more, mainly because the game play becomes tedious and the enemies, when alarmed, will demolish players in one strike. This make the game difficult and frustrating. For example, once you alarm an enemy, they know exactly where you are and kill you with one strike with a projectile attack. Aragami had a lot going for it at first, but as you progress the game losses that potential fast.

Aragami has some great visuals and audio, but once I jumped into it, I lost interest pretty fast. The developers could have spent more time working on this title to perfect the potential it had, but the game feels like an unfinished product. It is sad to say this is a hard game to recommend because I wanted so much out of this title.  Aragami is a game to pick up on a store sale; not for a brand new, Day One Edition release.