Available for the PlayStation Vita and Steam October 25, 2016, NIS America brings Yomawari: Night Alone to North America and Europe just in time for the Halloween season.

Story
Poro and Sis are missing.  It is up to you, the protagonist, to go out into the night to find them. There are scary things in the night, but not knowing where Sis is feels even scarier.  You must explore your neighborhood and escape the scary things that go bump in the night.

The story is emotionally driven and becomes more than surviving the night to find your sister.  Through the story the protagonist must come to understand mortality. [SPOILER] The protagonists initial denial of her dog, Poro, dying at the beginning of the game and her inability to admit to her sister that the dog has died starts her journey. Most objects you encounter are related to death or the dead somehow -you are not just trying to survive the night, you are trying to come to terms with the reality of death that surrounds you.

Game play
Yomawari: Night Alone is a 2D, top down survival horror.  Armed with only a flashlight, you cannot fight any of the monsters you encounter but must try to outrun them or sneak by without them coming into contact with you. You have the option to “Hide” or “Run”, but your running meter is limited especially if the character is scared. Most times you’ll need to analyze how the monsters move in order to figure out how to avoid them. Game play is exploring, collecting objects, and puzzle solving.

Most events are fairly short, but worthwhile when  you encounter them.  The simplicity of the game play translates the vulnerability of you character so the player feels the terror of what surrounds your character.

Visuals
The overall atmosphere of the game is eerie. The visible play area is a circumference of light around your character and whatever your flashlight illuminates.  You cannot rotate the camera, and quite often your vision will be obscured with the background; a tactic certain to make your heart pound a little bit because who knows what is lurking in the places you can’t see.  What makes the game stand out is the simple hand drawn 2D animation. Each monster is not elaborately drawn out but they still manage to feel very creepy. 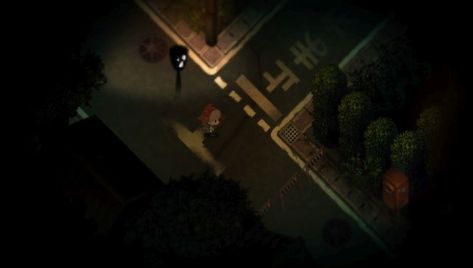 Audio
The audio, or lack there of, sets the tone of the game.  Most background noise you hear is ambient noise (crickets/cicadas, electrical humming, etc), the character’s footsteps, and the heart rate system where the heart rate increases when ghosts/danger lurks nearby.  This makes the game one of those games that will have you jumping out of your seat if you’re in the dark with your headphones.

Verdict
Pros:  Each element (story, game play, audio, visual) work hand in hand with one another to create a chilling environment and one aspect of the game doesn’t over power the other. Even though it is simple, it gets is message across and still manages to pull out a few jump scares.  This is one game I feel better playing with the lights on without my headphones, but the experience is that much more enhanced with them on.

I feel an emotional connection with the main character; a little girl who loses her dog and then her older sister.  Her pure determination to find them drives the story forward, even when you (the player) don’t even want to go the end of the block because of what is waiting for you. I also enjoy that the mentality of a young girl remains in tact through story, especially with the collectible objects.  As you read through each description, you discover the character has attached an emotional meaning with each object, much like a child would do.

There’s a slight replay value for those who like collecting trophies and achievements. There are variety of collectibles to pick up; some in some pretty hard to get to places.  But, the completionist will find their way back into the neighborhood.

Cons: The game can be simple, or complicated.  The game doesn’t necessarily tell you where to go, but seasoned gamers can easily pick up which direction to go. The challenge is eliminated when the game allows you to keep important objects even after you have been caught by a ghost.  You don’t really have to go back and analyze the patterns of how the ghosts move since you can basically just run in, grab the object, die, and start at a nice cozy save point.

If you happen to miss the event spawn point, there will be a lot of back tracking and at times this can feel pretty tedious.

Yomawari: Night Alone is the perfect game for October or when you want a good scare.  It’s not gory, but it doesn’t need to be gory in order for you to feel the terror of the night.  With its quiet atmosphere, creepy creatures, and story Yomawari: Night Alone easily made it to the top of my Favorite Horror Game list. To get the most out of this title, play in the dark with your headphones; you’ll be jumping out of your seat a few times.

Will you be picking up this title? What if your favorite “scary” game? Let me know in the comments.