Pokemon Sun/Moon is coming up soon.  If you still can’t decide which version you want, take a look at the Sun and Moon version of Rockruff and see if that will help you decide.

Lycanroc (Midday Form)
Type: Rock
In the world of Pokémon Sun, Rockruff is bathed in profuse amounts of solar energy, and Solgaleo’s influence causes this Pokémon to evolve into Lycanroc’s Midday Form. This form is known for speedy movement which can confound its opponents. A very loyal Pokémon, Lycanroc Midday Form dodges opponents’ strikes whilst attacking with the sharp rocks of its mane. Lycanroc Midday Form can learn Accelerock, a new move unique to the Pokémon, which is guaranteed to strike first, damaging opponents by slamming into them very quickly.

Lycanroc (Midnight Form)
Type: Rock
In the world of Pokémon Moon, Rockruff is bathed in an abundance of lunar energy, and Lunala’s influence causes this Pokémon to evolve into Lycanroc’s Midnight Form. This Pokémon will sacrifice its own safety to strike down its foes. The stronger an opponent is, the more excited Lycanroc Midnight Form becomes, its eyes glowing with the thrill of battle. This Pokémon feels a deep trust towards a Trainer who can draw forth its true power.

In addition, check out more Alolan Pokemon.  You think they brought out these guys for Harambe? (Too soon?)

Passimian
Type: Fighting
The Teamwork Pokémon Passimian attack by throwing Berries at their foes. They tend to live in troops of 20–30 Passimian, who all follow one leader. These tribes work in teams to train and improve their skills. This Pokémon has the Ability Receiver, an Ability which no previous Pokémon has had. With the Receiver Ability, Passimian can inherit the Ability of an ally who faints in battle. Passimian only appear in Pokémon Sun. 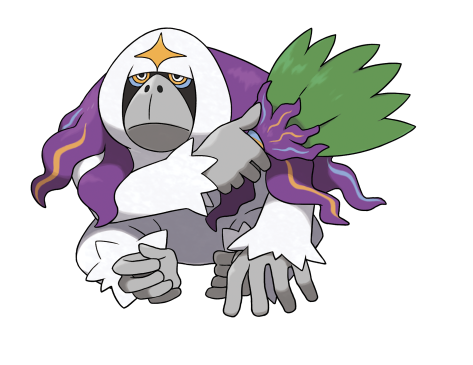 Oranguru
Type: Normal/Psychic
The Sage Pokémon Oranguru live in the solitary deeps of the Alolan forests and, in fact, were once known as ‘the people of the forests’. Oranguru hold a fan-like object made of leaves and are known to be kind to other Pokémon in the forest, often giving injured Pokémon medicine or hungry Pokémon food. This Pokémon can exclusively learn the new move Instruct, a move which can make the selected target use its most recent move again immediately. Oranguru only appear in Pokémon Moon.

Also, Pikachu and Evee’s Z-Move has been revealed:

Pikachu
Exclusive Z-Move name: Catastropika
Pikachu’s exclusive Z-Move, Catastropika, is a super-powered attack move where Pikachu borrows its Trainer’s strength, wraps itself in extra-high-voltage electric power, and charges into its opponents. This is Pikachu’s most powerful attack.

Have you decided which copy you will pick up? Let us know in the comments!