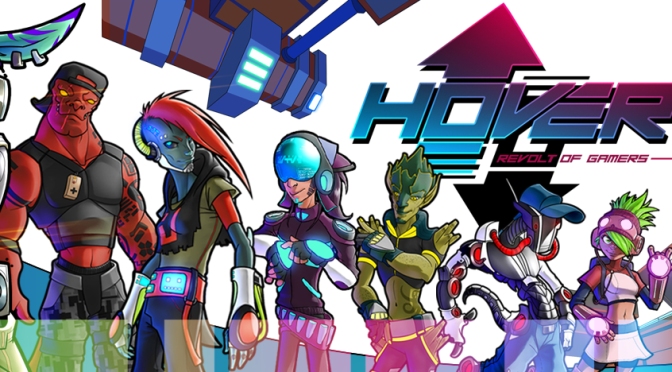 When I heard a game was coming out that was inspired by Jet Set Radio I was so hyped to play! I first played Jet Set Radio Future, before I even knew it was a sequel? or something? I forget. Anyway, all I know is I liked both Jet Set games. Hover somewhat reminds me of Jet Set in the music and the art style -but that’s about it.  Keep in mind, this review will mostly be a comparison between Jet Set Radio and Hover.

You start out in an underground science facility and told that your body is “new”.  I wondered if my character had died or if this was just an opening for tutorial reasons. After completing the tutorial I could explore the city and interact with NPC’s. Immediately, I was thrown into races and other mini-games that felt similar to basketball. I completed a few missions (mostly races), but there seemed to be no real story behind the game.  You would get bits of characterization from the NPC’s, but nothing beyond a few quips and phrases.  Aside from the races and basketball-esque game, there are delivery missions where you deliver packages (game consoles to be exact) around the map. I can’t say I was impressed by much of the gameplay, however, what I really did like was the soundtrack. I did see a lot of inspiration from JSR and rightly so since the music was composed by Hideki Naganuma. 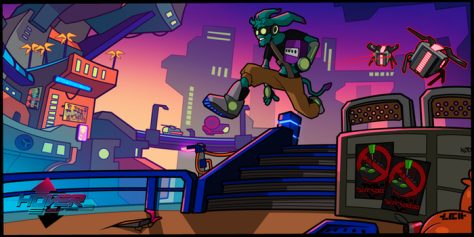 Hover is a little odd. One of the inspirations it takes from JSR is the abilities to do tricks and grind on edges, which is cool, however the characters don’t seem to be wearing skates.  Instead, they wear shoes that glow on the bottom. My character pretty much looked like he was running at high speeds all across town which looked awkward. Another oddity to the game was grinding. In JSR, if you want to grind simply jumping on the rail will automatically begin the grind, however, Hover forces you to push a button in order to grind.  This can get very tedious while playing and hard to adjust to. 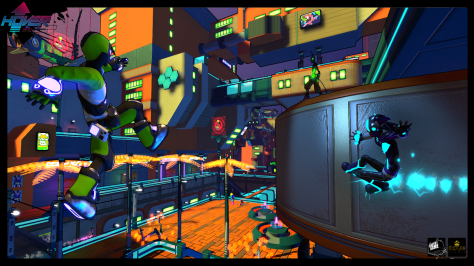 I only have four real gripes about Hover. First, the music only changes when you’re in a mission. Second, the missions aren’t all that exiting. Third, the ambient noise is almost non-existent.  Fourth, what is the story? Is there even a story? As I stated earlier, the missions I played were only racing, delivery,  and that basketball-like sport. Yes, JSR and JSRF had similar missions, but those were in different locations, there was more differentiation in music, and more variety of characters. It feels like this game was created with a multiplayer game style in mind  but interestingly enough, every mission I played had no extra people in them. I was always alone vs NPC.

Overall, Hover ISN’T a terrible game. It gave me the nostalgic feeling to go play JSR and therein lies the problem, how can I continue playing Hover when I have JSR already? I will probably go back to Hover at some point, but right now I don’t think I want to. Since it is an online game, maybe it will get updates.  Maybe it will improve and become more interesting. This is all I can hope for. I still think you guys should try it out and see for yourself. It’s currently priced at $19.99 USD on Steam. Have you tried it already? What do you think of it? let us know in the comments!