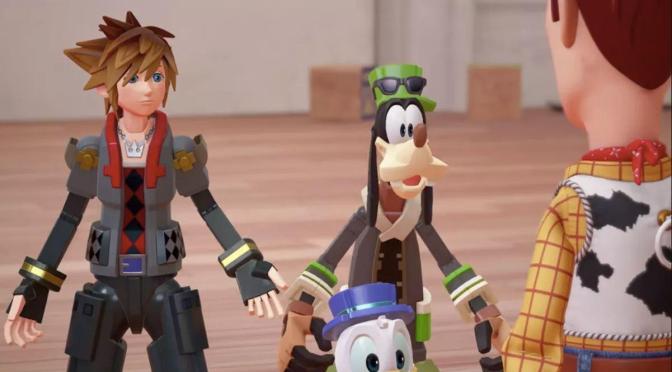 Many of us were hoping to see an official release date for Kingdom Hearts III at D23 Expo.  Instead, a new world has been revealed.   Taking us right back to our childhoods and hitting us with the feels, a Toy Story world will be featured in the upcoming title.  The latest trailer shows Sora, Donald, and Goofy in Andy’s room.  They join Woody, Buzz Lightyear, Hamm, Rex, and Sarge in order to investigate the disappearance of Andy and the fellow toys.

“At long last, we are excited to open up the KINGDOM HEARTS universe to include the world of Disney•Pixar’s ‘Toy Story,’” said Tetsuya Nomura, Director of the KINGDOM HEARTS series. “I’m sure fans have been anticipating the inclusion of this world for many years. The narrative will be an original story exclusive to KINGDOM HEARTS III, and the gameplay will feel characteristic of the ‘Toy Story’ style and aesthetic. Please stay tuned for more details to be revealed soon.”

“Featuring a brand new storyline that brings together beloved ‘Toy Story’ friends with the heroes of KINGDOM HEARTS, the ‘Toy Story’ world in KINGDOM HEARTS III successfully mirrors the level of quality that we strive to achieve with every Pixar film,” said Jason Katz, Story Supervisor, Pixar Animation Studios. “KINGDOM HEARTS III will undoubtedly be an experience that fans will not want to miss.”

Check out the latest trailer below if you haven’t seen it yet.

So far, this makes a total of six worlds we have seen in trailers and announcements. In Kingdom Hearts III we are certain to see the worlds of:

What other worlds are you hoping get incorporated into the KH3 series? What has been your favorite world from the other games so far? I also noticed it looks like they might incorporate a lot of game play style used in KH 2.8.  What do you think of the gameplay revealed so far? Let us know what you think in the comments!