Despair hits your home console with Danganronpa 1.2 Reload. Originally two separate titles on the PSP overseas, then later ported over to the PS Vita in America, then onto the PC (Steam), and… finally, now on the PS4 as a 2-in-1 game. Danganronpa will be settled on nearly everything (we are just waiting on you now, VR).

For those who have not played the game, Danganronpa is a psycho-pop mix between Battle Royale and Ace Attorney, but as a visual novel, with murder, mystery, investigations, “hope” and “despair” written all over it.  If you haven’t played it yet, you have no excuses. 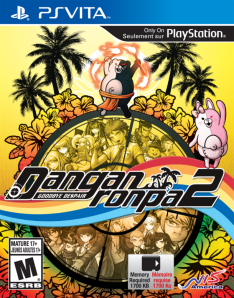 As a visual novel player, I had some speculations about stepping away from a portable system. I prefer to play visual novels on my portable PS Vita, particularly  because it feels like an on-the-go interactive reading experience instead of a game, but to be honest, Danganronpa on the PS4 is almost a perfect fit.

Danganronpa has always had a unique look for characters, environments, and items in each game combining hand drawn elements with 3D environments; this unique style is what brings players  to the game.

Moving over to the PlayStation 4, there’s a noticeable difference in in-game details which makes the game really pop on the television. There are a variety of things I missed when I was playing on the PS Vita because I just couldn’t see them. With an HD boost and moving at 60 frames per second, cut-scenes feel more engaging on the big screen and seeing the character details up close looks amazing. New and old players will appreciate the HD boost of both titles.

The only real downfall I noticed is that the HD boost wasn’t translated in certain spots of the game. For instance, the Monokuma Theater segments looked like they were just blown up in aspect ratio, which made the adorable cut scene, blurry and not as fun to look at. The blown up aspect is painfully obvious and could have used a little more TLC. However, it still didn’t take anything away from the overall appearance of the game.

Danganronpa, as I said before, is a nice mash-up of themes from Battle Royale and Ace Attorney. 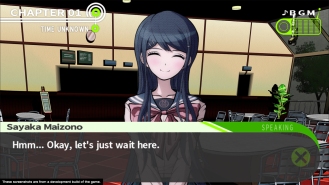 About Danganronpa: Trigger Happy Havoc
Enter Hope’s Peak Academy, a school only the students with the Ultimate Skills are allowed to enter.  Graduation means guaranteed success in life! Makoto Naegi, the protagonist of the first game, is picked to attend by sheer luck and he  couldn’t be more excited.  However, after entering the Academy things become blurry and wakes up in a classroom.  The windows are sealed shut and surveillance cameras are everywhere.  Is this really Hope’s Peak Academy? He meets up with 14 other students, each with their own Ultimate talent, and they are all just as confused as he is. Monokuma, the headmaster of the school who happens to be a robotic black and white bear, tells them that they must live out the rest of their lives in the school.  There is one way, however to get back to the “outside” world, and that is to commit the perfect murder. Why is he doing this to them? For despair; chaos without reason! Can hope overcome despair? Which side will win? Let the killing game begin!

About Danganronpa: Goodbye Despair
The second game is similar to the first.  This time you play as Hajime Hinata, a student with seemingly no talent whatsoever compared to the other Ultimate students that surround him. Rather than a school, you’re stuck on Jabberwock island -a mysterious tropical island where Usami, a pink bunny rabbit, tells the students to live a peaceful on the island. As the students are ready to accept their joyful life on the island things take a dark turn when Monokuma enters the scene, turns Usami into Monomi (a pink and white rabbit similar to his design), and forces the students to participate in yet another killing game.

For those who have already played Danganronpa before, you’re really not really gaining anything new, except for the chance to get sucked back into an awesome game you have already played about 3 or 4 times over by now. For those who haven’t played the game, this is one of those must-haves if you like dark comedy, visual novels, and problem solving.

I was impressed by how smooth the game play felt.  Where appearing text felt like it was lagging on my portable consoles, the text was practically gliding across my television, enough for me to create a steady pace to the game without missing any details. Another little feature I appreciated was the use of the touch pad to bring up dialogue. It puts that touch pad to use and felt unobtrusive -meaning I don’t accidentally hit the button while I’m playing.

Class trials also run very well.  However, there really is no challenge.  That’s just how the game works in general; I don’t think it’s actually meant to be hard. I put my settings to “Mean” since I’ve played the games at least 3 times already, and trials still run extremely fast.  That’s not to say it isn’t enjoyable to sit back and watch how all the intricate pieces of the story connect.  That’s really the true joy in playing the game. Old comers, play the game on mean; newcomers, play on normal and watch the events unfold. 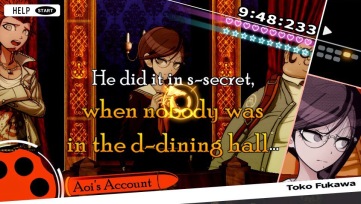 This is a must have-title for any Danganronpa fan, or anyone who enjoys the visual novel genre.

For those who have not played a Danganronpa game before, this is an excellent pack to have.  Not only is it a great story, you get both titles in one neat package so you can find everything in one place.  Once you finish one title, you don’t have to wait for the second one! And trust me, you’ll definitely want to see what the next game has in store for you.

If you have already played the games before, the replay value comes from appreciation of the game, and let’s not forget finishing off your trophy collection on the PSN. While some graphics didn’t quite translate well from the portable version to the HD version, the story itself is worth replaying again.  And while you’re at it, watch the anime series, and  wait in eager anticipation for the release of Danganronpa V3!

Are you a fan of the series? Will you be picking up this sweet bundle for the PlayStation 4? Do you have memorable Danganronpa moments you would like to share? Let us know in the comments!