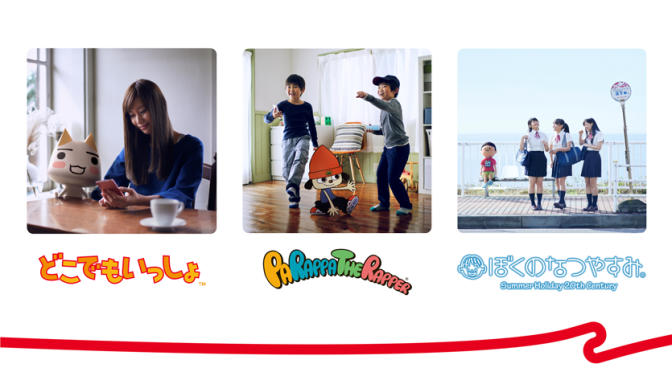 During a press conference in Japan eariler today, Sony has announced its upcoming Mobile Line-up with FowardWorks, a subsidiary of Sony interactive Entertainment.

You can catch all of the announced games below

(As of right now, this is a japan only announced)

“Everyone’s GOLF” series that has been building immovable status as a golf game that everyone can easily enjoy since its appearance in 1997. Such a national golf game, the new dressing also debuts with a work name “Mingol” as a smartphone. While inheriting the concept of the traditional series that anyone can easily enjoy exhilarating shots, it has been reborn as a more simple and more intuitive operability.

Under the supervision of the “Everyone’s GOLF” team, we boldly plan the way of enjoying smart hobby and gaming, and working together with partner Dorikomu Co., Ltd. to develop and aim for distribution in the spring of 2017.

“Yuu Nama” is an action puzzle! “We are covered by the brave’s habit DASH!”

A series of destroyed gods called by the demon who wishes to conquer the world, defeating the brave who will challenge next from the next, “It is a brave man’s habit”. From the popular series, popular series known as “Yu Namama” which gained popularity with the PSP® “PlayStation · Portable”, the action puzzle for smartphones “DASH! .

The rules are simple. If you align three or more blocks with touch and slide, a demon occurs and attacks the brave. Although it is a simple puzzle game, it is highly addictive and should not stop when you start playing. Small stories that can be laughed as cumbersome as “勇 な ま” are also scattered everywhere. SIE Japan Studios develops and plans to deliver it in the summer of 2017.

“We are covered by the brave’s habit DASH!”

We also launched the “Reboot Project” to revive masterpieces of PlayStation® old-fashioned on smartphones. “Ark The Rad” was released in 1995 at the first PlayStation®, a hit that opened up a new era of RPG. We gathered support from many users with the tagline of “RPG of light and sound”, gorgeous directing, heavy sound giving depth to the story, and overwhelming recreational elements.

In this reboot project, we are working on a completely new work depicting the continuation of such a story of “Ark The Rad”. The original staff also gathered again, planning · original draft · game design is Toshiro Tsuchida who served as producer at “Arc The Rod 1” “2”, Mr. Norihiko Yonezaka for scenario, Eiji Koyama at supervision of the event, at the end of the country Mr. Ryuichi, Mr. Hayashi Hiroshi, music is T-SQUARE’s Mr. Takeo Ando is in charge.

In 1996, “Wild Arms” that appeared in the first PlayStation®, became a popular series in a world view, a strategy full of games, and a dramatic scenario that fused western fantasy and fantasy. As we celebrate the milestone of 20th anniversary, we announced the “reboot project” which develops a completely new work which the successive characters appeared and draws a new story for smartphones.

Mr. Akifumi Kaneko, supervisor of the series, supervises the work, Mr. Nagiko Michiko continues to be in charge of music, a new page is engraved in the history of “Wild Arms”.

“It’s been a long time ago! It is Kaneko who will be supervising” WILD ARMS “.
It took quite a while but I can not hide the joy of being able to see you all at the end of the wilderness.
Despite being the 20th anniversary of the series this year, there is no telling until the end of the year! The burial plays of the government called,
“Kaneko in the first place, a husband whose head is not rolling in other jobs”, I let you guys do not need it … …
I was able to get here until I finally got over the circumstances of my troubles (hard work), adults!
To everyone concerned, the staff who is working, than anything –
I am grateful to all the fans who have kept me waiting and supporting me.
This title will be a completely new “WILD ARMS” that turns the platform into a smartphone and then partners with Wright Flyer Studios.
Kaneko who is a fond of migrating birds, I am excited about the release day, so I can hardly wait for the release date from now, but I imagine that there are not many people who can get out of anxiety from fears I will.
But, would you please watch over the spirit of the staff who intentionally selects and restarts a strong title of “Tonkotsu” with “Tonkotsu”?
Mr. Yamashita, Director of Development for Wright Flyer Studio, is a little magazine written in the proposal proposal, “Starting with Tony and ending with Raguoo Ragilla”.
Kaneko is truly committed to having a great deal of confidence in doing it without shyness though it is a sentence which does not show any effect in the document which it shows to the great people.
A new “WILD ARMS” that makes with them. It may be somewhat different from “WILD ARMS” in your memories.
Still, since I will do my best to be a new memo –
Could you please expect? Thank you !! “

Characters representing SIE also advance to smartphones. Three series of “Whereabashoso”, “Rappa wrapper”, and “Natsuyasumi of me” were announced each time. Details will be announced at a later date, but please look forward to the day we can meet on Toro, Palappa, Moku-kun on a smartphone.

In Forward Works, we are collaborating with software makers who have played together PlayStation® together and are working on creating titles in the smartphone market. One such partner company is Nippon Ichi Software Co., Ltd. Currently, “Disgaea Makai Senki” series and “Night time” are co-produced for smartphones.

Square Enix is also a partner!

A joint project with Square Enix Co., Ltd. is also in progress. Since the first PlayStation®, Square Enix has worked on various entertainment with SIE for about 20 years. Although details on the project have not been announced yet, in the future, we will also work on a new challenge jointly with the smartphone market.

Also announced a completely new work handled by Forward Works. The first part is “Sora and Umida Ida”, which was the main character of the six girls who challenged “space fishery”. Hiroi Oji went to the original and general manager and dramatically depicts their growth.

In the era of fish depletion from the sea, the government established Ikes in outer space, where he began fishing. The dangerous space fishing was the profession of the rough, but from the voice that “Space fisher is a woman”, the Onomichi space fishermen training center female department will be created. Six girls were chosen from the whole country as their first phase candidate. The stage of the story is Onomichi. What kind of growth will girls achieve in the city of Onomichi full of culture, with a deep historical and rich natural environment? Please expect the six shooting stars running through the stars’ sea.

“Sora and the Sea of Aida”

In Forward Works, we are not only limited to the existing smartphone game but also to create new play that links various technologies, ideas and entertainment. One of them is “Project FIELD” working with Sony.

“Project FIELD” is a platform that consists of smart phones and tablets, dedicated pads developed by Sony, cards with integrated IC chips, game applications, and a combination of trading card games and smartphone applications. Various functions such as a position detection sensor, IC reading device, LED, Bluetooth® etc. are packed in the special pad, and when putting a card on the pad, it can quickly detect the direction and movement and exchange data with the smartphone game application through Bluetooth® can do.

Not only the position and orientation where the card is placed, but also movements such as vertical slide, slide to sideways, change direction, for example, can also be detected, and games such as “attack”, “avoidance” and ” It is reflected in play. Since the data of the IC chip can be read not only but also can be written, the card and the game application can be bidirectionally interlocked. For example, it is possible to grow a character card with the experience value acquired in the game. In addition, it corresponds to a way of playing by fighting with friends by connecting two pads to a smartphone or tablet. Because the rules and calculations of card games are done automatically by the application, even children can easily play with them.

According to Mr. Kazuyuki Sakamoto of the Sony Field Office, it seems that the product “My First Sony” for children released from Sony in 1998 is the origin of the idea. “My First Sony” is a product that wishes to inspire interest in science as an acoustic product that a child first touches. “Project FIELD” underlies similar ideas, “Provide experiences like” modern my first sonny “to children of the present age through” play that can actually be picked up and touched ” Can not start “started from the idea. It is becoming a platform in which I thought that “I want to provide children with a new game experience by fusing analog experiences and digital play”.