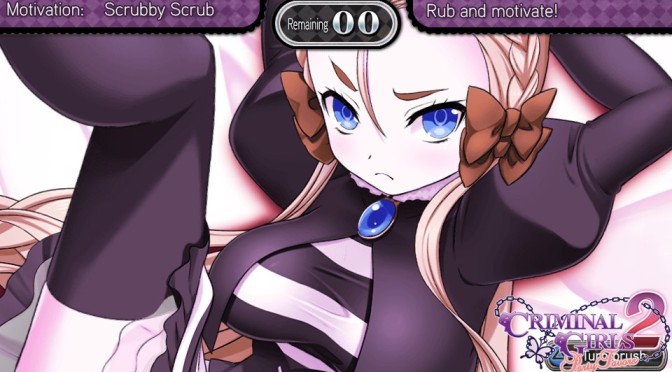 Published for the PlayStation Vita by NIS, Criminal Girls 2: Party Favors is a sexy game where you have 8 babes under your command.  Even before release, the game has had much controversy due to content and changes made during localization.  You can pick your bandwagon, but personally, the changes  (mostly in artwork and select wording) made little difference to me.

Story
You are sent to hell and must go through the the Reformation Program to reform a group of delinquent girls.  You have lost all of your memories and need to find a way to gain their trust. With so many rowdy girls, you must figure out how to get them to wor 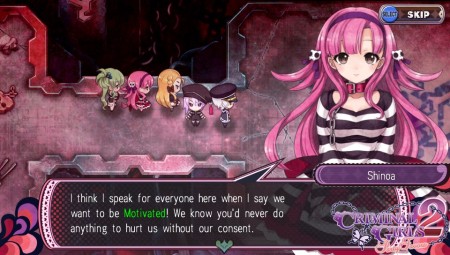 Gameplay
Much like the first game, Party Favors is dungeon crawler JRPG.  As you venture through

Hell you must clear the dungeons and fight convicts along the way.  Fighting convicts will earn you CM (the game’s form of money), and with special “tools” you’ll need Motivate the girls to unlock moves.  One change, compared to the previous game Criminal Girls: Invite Only, is that you can pick and choose each girls’ moves.  The move you select determines whether they are more  “S” side, or more “M”.  This comes into play later during battles.  What pretty cool about choosing their moves is you have the option to reset them if you find one style isn’t working for you.  Strengthening the girls relies heavily on “Motivation” and leveling up fighting Convicts; Motivation being more central to the game.

Battles are turn based.  You can only pick one character to attack. It’s hard to predict how strong the convicts you are fighting are and there’s no system in place to tell you when they will attack.  You definitely need to have a stock of healing items to cure ailments and keep your girls alive.  Of course, certain characters have healing capabilities, but sometimes it consumes too much MP which could be better spent on attacks.  On top of that, you don’t get to select specific moves from each of the girls, rather, you have to choose whatever they feel like using in battle for that tu

rn.  Battle is also made a little more interesting in that as their Reformation Leader, you can “Coach” them through battles.  You can cheer them on, scold them, and so on. Depending on the moves you selected for them (S or M) they will have a positive or negative reaction in battle.

The girls are sprites while you crawl through the dungeon, but during “Motivation” time they are  2-D animations that react to your action; they jiggle and blush from the action.  The more you Motivate them, the more the scene reveals to. They are also 2-D drawings during the dialogue but, like most JRPG’s, are static.

Each level has it’s own design and feel.  Depending on which part of Hell you are in, the dungeon will look different.

Music
If you’ve played Criminal Girls: Invite Only, then a lot of the music will

sound familiar to you.  The Motivation and Rest music hasn’t changed much.  Since each dungeon has it’s own design, the music is also meant to match the feel of the dungeon.  I think the background gives the game a very “Playful” vibe, which is essentially what the creators are going for with the game.  As you journey through, the girls will also talk while you’re walking making it feel like you are actually leading these girls through hell. 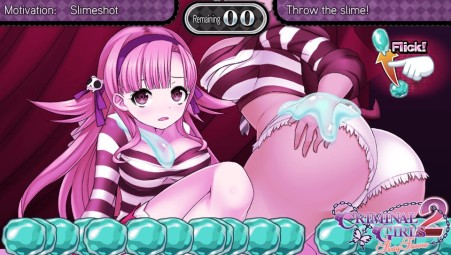 Pros: There are a lot of new elements introduced into the game to make is stand out from the previous title.  The fan service stepped up a notch.  Girls are “Motivated” in pairs, or solo and the detail that goes into the motivation is pretty amusing. You’ll definitely be wondering how the heck some of the content even made it into a game. The story isn’t completely recycled, although, there are a lot of similarities to the first game.  The game is pretty easy to pick up, especially for those who are new to Criminal Girls.

Cons: The game is about 90% fan service and very little story. The game heavily relies on “Motivation”, in fact, that’s pretty much what the entire game is: unlocking those sexy scenes! In order to get the motivation scenes you need CM and that means grinding battles like no tomorrow!

Enemies are fairly hard to defeat, especially bosses. Even if you’ve Motivated the girls to their full potential you will still find yourself needing to grind through battles to level up.  In the end, I felt like I couldn’t sit through the game for long periods of time because I didn’t want to just battle monsters for an hour just to get more moves, level up, and barely escape a boss fight

-I really just wanted to get to the story!

Moves you unlock for the girls aren’t really effective and girls share similar moves, they even share similar moves from the first game.  For example, both Kuroe and Tsukasa have ice powers and healing powers.  Elemental moves don’t really have an effect on the monsters so it’s difficult to find a weakness and exploit it. This can be considered somewhat or a pro because even if the elemental move is irrelevant, the move can still slow down, paralyze, confuse, or poison an enemy -if it is a successful hit.

If you want to pick up a controversial title with some sexy scenes, Criminal Girls 2: Party Favors is a good buy.  I had a lot of fun with the first game, and the second one definitely makes you strategize your attacks and item consumption. With the new features added to the game, you definitely don’t feel like you’re playing the first game over again. For me, it wasn’t a title to sit through, but one to pick up and kill some time with.

Will you try out Criminal Girls 2: Party Favors?  Have you played Criminal Girls: Invite Only?  Any additional comments? Let us know!