What happens when you add more comedy to Cowboy Bebop? You get space Space Dandy! He’s a Dandy guy, in Space.

The series follows Dandy, his robot QT and later Me#$%* pronounced Merowmreowreow or Meow as the guys call him later. They search the galaxy for undiscovered alien life in order to collect the bounty. The story is at first loosely interconnected by a background story about two empires at war with one of these empires trying to capture Dandy for some reason, and Dandy has no clue this is happening all he cares about is getting reward money, booty and Boobies his favorite breasturant akin to Hooters. It’s actually pretty hard to say which episodes are even cannon within the show, I mean there’s even a zombie episode where everyone turns into zombies in the end, even the narrator! 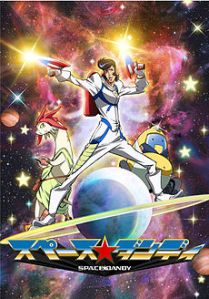 The show can be a super comedy but it can also get serious and get you right in the feels. Dandy may not be the smartest guy around but he can get serious when it matters. I still can’t get over a certain scene where everything would have turned out awesome if he had just turned around!! waaah!!!

Give it a watch, the entire series is only 26 episodes long and worth the watch. If you’ve seen it let me know your thoughts in the comments!