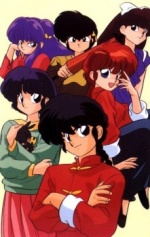 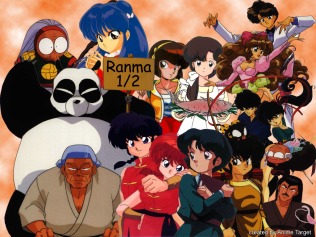 Back in 1989, Japan saw the release of Ranma 1/2. The animation recieved poor reception and  only lasted 18 episodes before it was cancelled. A few months later, it was reworked and went on to produce 143 episodes! I am glad they reworked it because Ranma 1/2 is one of my all time favorite anime/manga; it was actually the first manga series I really got into.

The story follows Ranma as he tries to live a normal life while being cursed. His curse? He turns into a girl every time he is splashed with cold water and back into a boy when splashed with hot water. He tries to keep this a secret from his classmates at first, but as the series progresses many characters discover his secret. Reoccurring elements of the story are the girls chasing Ranma wanting to be his fiance, or his rivals wanting to beat him in martial arts. It is actually a very funny series because Ranma is not the only one who is cursed: his father turns into a Panda, one of the girls chasing him turns into a cat (and Ranma is super afraid of cats), his main rival turns into a pig who happens to be in love with one of his fiances, and more!

The cool thing about the series is that it doesn’t completely follow a set story. Most of the time you can grab any old volume and read without missing too much. Of course, you should read the first volume to get a good idea of the main characters. This series comes highly recommended, give it a watch/read!

Have you picked up this series yet? If so, what did you think? If not, do you plan on checking it out? Let us know in the comments!