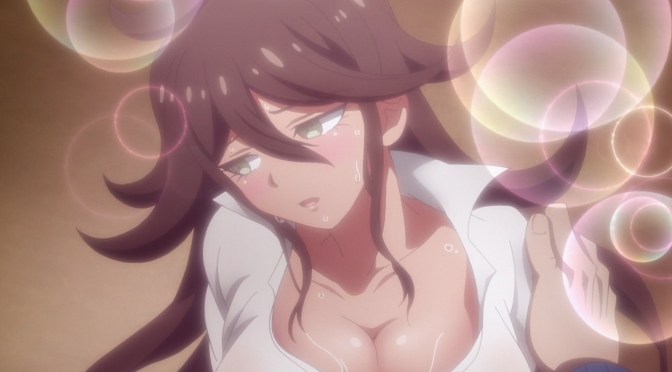 I did not have a chance to review episode 1 of Despair Arc. But here it is, one week later, along with episode 2.  Upupupupu! *Warning: this contains spoilers, in fact, it’s basically all spoiler.  You have been warned.*

Episode 1: Hello again, Hope’s Peak High
The Despair Arc feels like it’s going to be a lighthearted story compared to the Future Arc.  We meet Chisa Yukizome in her role as home room teacher for class 1-B. The episode focuses mostly on introducing us to each student’s personality at Hope’s Peak Academy and bringing the class together as a whole.

Two characters that stick out like a sore thumb for those who have played Danganronpa 2: Goodbye Despair are: Chiaki Nanami and Ryota Mitarai.

Ryota Mitarai appears as a fatter version to his counterpart in the Future Arc.  I suspect that he is actually the Ultimate Imposter who we meet in the game as the chubbier version of Byakuya Togami.  I’m not quite sure why they chose to have him impersonate Ryota Mitarai versus Byakuya Togami, but it’s a mystery I’m hoping clears by the end of the season. Perhaps as a way to connect Future Arc with the Despair Arc?

Chiaki Nanami has a lot of theories circling around her.  In Goodbye Despair she is not a student of the class, but an AI working alongside Usami and is thought to only exist inside the Neo World Program.  Seeing she actually exists within the class raises a lot of questions.  Is she a robot? Does she really exist? Are they in a program?

I think Future Arc and Despair Arc might be more connected than I initially thought. Chisa Yukizome and Kyosuke Munakata are working on creating a Hope’s Peak over seas,  but the conversation the characters hold is shrouded in a lot of mystery with a greater story behind it. Or so it seems.

Episode 2: My Impurest Heart for You
Personally, I loved every reference.  We are hit right at the beginning when Koichi Kizakura says he needs to go out scouting because “There’s a girl they say is undefeated in the underground gambling world.” (Celeste) Then, Teruteru also makes a reference to Seiko Kimura, saying “I worked on this with the Super High School-Level Pharmacist, our upperclassman” to explain how he has mixtures for doping, and later, lusting. Then of course there’s Chiaki’s Nantendo Game Girl Advance. Then there’s also Smash Bro’s, Mario Party, Mario Kart, Bomber Man, and Double Dragon! And more…

Despair Arc is going to have a decent amount of fan-service.  I mean, with Mikan in the main cast, it’s pretty much a given. But, prepare for some hysterically fun time.

Again, something is hinted as “You know what” regarding Hope’s Peak Academy.  Chisa and Kyosuke Munakata both remain vague. We do learn money  is coming from the reserve course students to help fund another project at Hope’s Peak Academy but the Chisa suspects the Board of Directors are hiding something. We also learn that Chisa is directly investigating the Reserve Course, a task considered to be “dangerous”.  More mysteries to unfold is who is Mahiru’s friend in the reserve course?

We are being fed a few bread crumbs to show what has led to The Tragedy. In Chisa’s “investigation” she asks Hajime why he joined the Reserve Course, he responds by saying he’s always aspired to attend Hope’s Peak Academy, but now he feels likes he lacks the resolve.  Chisa pries asking if he has a chance to join the main courses.  While he denies this, it seems Hajime assumes that it is a possibility.  In his conversation with Kazuo Tenga, the experiment Hajime will later undergo is briefly talked about, Kazuo advising against it.

I think Chiaki is more central to the Remnants of Despair than I initially thought.  While she is an AI in the game, it does not mean that she couldn’t have actually existed as their classmate as well.  My theory (please share yours in the comments as well!) is that Chiaki never fell into despair like her fellow classmates. It would explain why she’s an AI in the game, and why they would consider her a “traitor”. If she fell into despair, there’s no need for her to be in the Neo World Program; she could only appear as an AI.

Watch the episode past the credits.  It’s a must.  Because we meet a brand new character at the end; one who we know will certainly die.