To check out more from Controller Chaos click here.

To check out more from TIER1 Accessories click here. 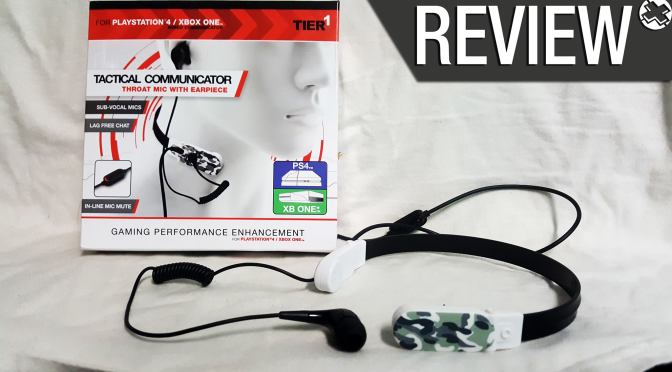 The unit itself looks like a tiny pair of over the head headphones. I made the mistake of trying to put it over my head and thought “This is too small!” Then, I realized it’s supposed to go around your neck.  When I fit it around my neck it wasn’t too loose or too snug, and there was just enough pressure to keep it from sliding around. It feels a little odd at first, but once you get into your game it becomes an afterthought.

The audio comes through clearly and is a step up from the default headsets that come with the systems. Since the microphone is sub-vocal, you don’t have to keep adjusting the microphone -it always stays in the same place. I like this feature because it means I can keep my hands on the controller at all times.

The Tactical Communicator can be used on mobile devices, PS4, and the Xbox One, 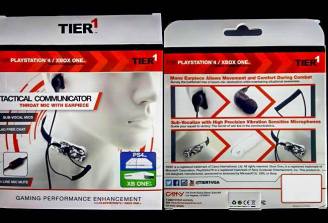 however, the Xbox One needs an adapter as the headset only has a 3.5mm jack. Overall, it works best for the PlayStation 4 -but that’s what it’s advertised for anyway.

One thing I would like to see is more color options.  The Arctic Camo styling is neat for those who really like camo gear, but (and I’m sure many others would agree) I would prefer to see it in black or in other color options.

If you’re looking for something comfortable, compact, and reasonably priced with good sound quality to use on your PS4, the TIER1 Tactical Communicator is a good way to go.   you’re getting a lot more than what you pay for. You can find this neat little gadget here for $14.99.

Have you tested out the TIER1’s Tactical Communicator? Do you think you will try this out? Let us know in the comments!

Headphones come in so many different varieties that it’s hard to decide which kind to buy. Do you want great quality sound? Does the material matter? Are they easy to use? Portable? Bulky? Eventually I said screw it, and starting using whatever is available.

Now, after getting my hands on Tier1’s Full Metal Jacket earbuds (FMJ’s) I started questioning life itself: why have I been using sub par quality headphones? I scrounged up all the headphones I have and did some comparing and found out I really do prefer the FMJ’s and here is why. 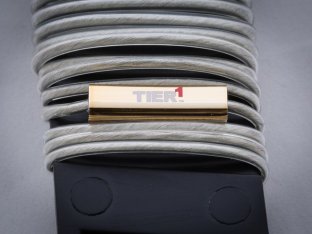 easy to use carrying case

I really liked the audio. The quality was much better than any of the other headphones I own. I believe the machined metal truly did help the audio quality and the fact that they are in ear helped cancel out ambient noise.  The in-line mic also captures your voice crisply and clearly and can be used on your mobile device or your controller.  The only thing I did not like completely about these earbuds was the plastic covered wires, after being in the carrying case for a while they start to take on the shape so when you remove them they like to twist and bend. If you like straight wires then don’t use the carrying case. Overall, for the price of $29.99, I definitely recommend these earbuds.

If you are interested in getting your own pair, you can find them here.