Nippon Ichi Software has launched a new teaser website for a new unannounced title. The URL contains the text “hakoniwa,” which translates to “miniature garden” in Japanese.

The only content that can be found on the website as of now is a video which appears to show a sandbox building game similar to Minecraft.

No word has been announced on what this title may be but you can watch the teaser video below.

Today Square-Enix has posted a somewhat of a teaser for an “exciting announcement” on their blog.

The companies’ blog had this posted:

“Keep an eye on our #SquareEnix social feeds tomorrow for an exciting announcement!”

What could this be? Could this be Kingdom Hearts III news? Or even Final Fantasy VII Remake new? Well we sure enough will find out tomorrow.

You can follow Square-Enix social feeds at the links below. 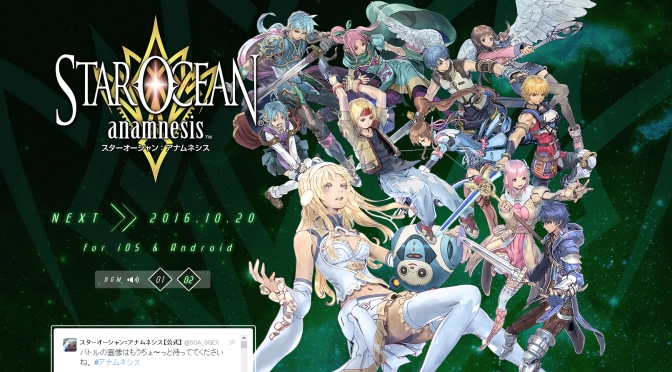 Square-Enix and tri-Ace has announced that a new Star Ocean title will be coming to smartphones and it will be called Star Ocean: Anamnesis. The company has not announced a release date yet, but that they will have more information about the game October 20.

You can visit the official site to check out the two background music samples that will be in game.

Also by going to the website and checking at the artwork, the only thing we can speculate is that the game will most likely have appearances of the main characters from the Star Ocean series.

Over the weekend Rockstar Games tweeted a pic, and the internet went crazy over it, because it was potentially a Red Dead teaser. Today Rockstar added another teaser, which you can catch below, confirming the first one was Red Dead related.

So will Rockstar Games release a new Red Dead game, or a re-release? All we know is that we are getting closer to the announcement and it is indeed Red Dead related.

Earlier this morning Rockstar Games has updated their social media sites with a new image. The internet speculates that this may be a new Red Dead announcement, but will it be a new game, remaster, or even a re-release?

Rockstar has not confirmed any news on what this means or if it is a teaser of some sort, but NCG will keep you informed as the news becomes public.
Is the a sign of a new Red Dead game on its way?What are your thoughts?