Remember arcades? I think it would be pretty neat to know how much money those things took from me throughout my life. My guess is over 200 dollars.

CarnEvil is a game from the 90’s, it came out on Halloween of 1998 and was developed/published by the now defunct Midway games. The game is a railway shooter played with shotguns, the story revolves around an urban legend from Iowa, a fake one I believe.

Anyway the protagonist is on a ghost tour and he gets off to test the legend, the legend states that if a golden token is inserted into the jester’s mouth on top of the tombstone of Ludwig von Tökkentäkker, a ringmaster buried in the cemetery, a haunted amusement park will rise from the earth. Long story short, it turns out to be true and he must survive by killing the 4 main bosses of the amusement park: Evil Marie (a take on bloody Mary?), Krampus (Santa’s Evil counter part), Junior (A giant baby), and The ringmaster himself. Once the bosses are all killed the game ends with the protagonist and one other survivor left.

The game play is your standard rail way shooter, you don’t move by yourself and you don’t move until you’ve cleared the current screen of enemies. Considering this is an arcade game, its difficulty is pretty high, expect to lose a lot of quarters. The graphics have aged quite a bit, they don’t hold up to today’s standards but that’s to be expected nothing from the 90’s holds up today. 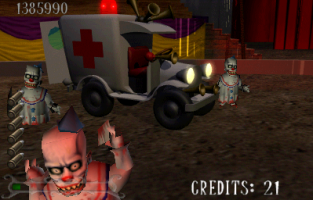 Did you ever play CarnEvil? if you haven’t and ever find it you should give it a try, its one of my favorite arcade games.

Spooky Factor: Only spooky if you’re a baby